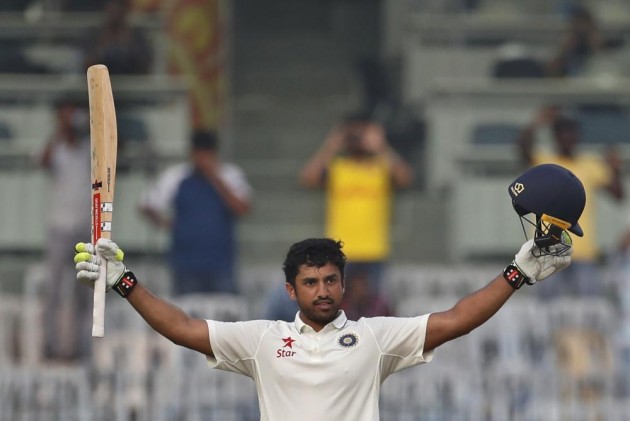 Chepauk Stadium in Chennai witnessed a historic game of cricket on Monday as India scored its highest ever Test total with the help of Karun Nair’s epic triple century.

India declared their first innings at 759 for seven on the fourth day of the fifth and final cricket Test against England with Karun Nair scoring 303 not out.

With this, Karun Nair, who was playing his third test, has become only the second Indian batsman to score a triple century in a Test match after Virender Sehwag. Sehwag has two triple centuries to his credit. Incidentally, Sehwag also scored his triple century, 319 against South Africa, in the same stadium where Nair created history.
Nair, a Malayali who plays for Karnataka in the domestic circuit, made his debut against England in the third Test of this series in Mohali. He represents Delhi Daredevils in the Indian Premier League.
Nair and KL Rahul (199) led India's reply to England's 477 first innings total with a 161-run stand. Nair arrived at the crease when India had lost Cheteshwar Pujara and Virat Kohli.
India have already secured the five-Test series and hold an unassailable 3-0 lead.
An elated Sehwag congratulated Nair on Twitter. “Yay ! Welcome to the 300 club @karun126 . It was very lonely here for the last 12 years 8 months. Wish you the very best Karun.Maza aa gaya! (sic),” he tweeted.

Continue FREE with Ads Pay Rs. 1 to Read Without Ads
READ MORE IN:
Karun Nair Sports
Next Story : RTI Reveals That The RBI Had Only Rs 4.94 Lakh Crores In Rs 2000 Notes On November 8
Download the Outlook ​Magazines App. Six magazines, wherever you go! Play Store and App Store