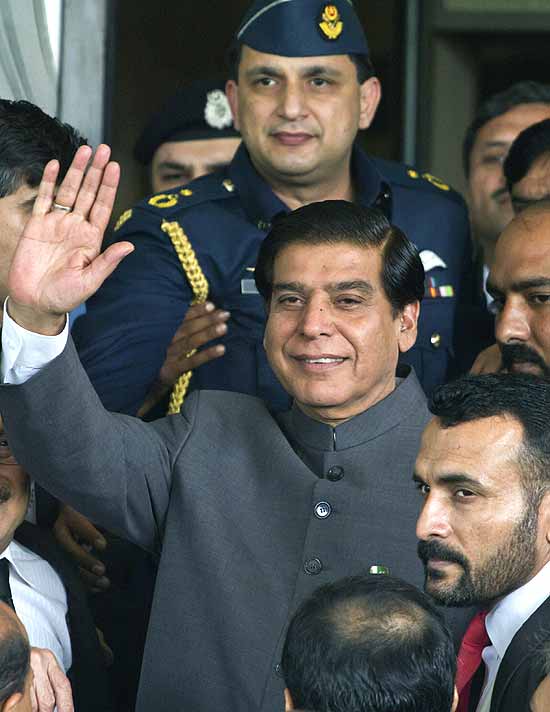 outlookindia.com
-0001-11-30T00:00:00+0553
In a U-turn, Pakistan Premier Raja Pervez Ashraf today told the Supreme Court that his government would revoke a letter to Swiss authorities asking for the closure of graft probe against President Asif Ali Zardari, a move that may pave way for reopening of the cases against him.

Ashraf informed the apex court of the government's decision when he appeared before a five-judge bench headed by Justice Asif Saeed Khosa this morning to face a contempt charge for failing to reopen the cases against Zardari.

The Prime Minister's move to revoke the letter came as a surprise because till date the government had refused to act on apex court's demands saying the President enjoys immunity in Pakistan and abroad.

With the revocation of the letter written during the regime of former military ruler Pervez Musharraf, Ashraf said it would be up to Swiss authorities to decide whether the cases against Zardari should be reopened.

Recent reports in the Pakistani media have suggested that the statute of limitations in Switzerland has ended and the cases can no longer be revived.

The government is also banking on the premise that Swiss authorities will refuse to reopen the cases as the President enjoys immunity under international conventions.

The apex court will hear the case next on September 25 and has exempted the Prime Minister from future appearances.

"I do not want to seen standing on the wrong side of the history," Ashraf said in the court hearing that lasted nearly 50 minutes.

In late 2007, Qayyum had asked Swiss authorities to close the cases against Zardari and his slain wife, former premier Benazir Bhutto, after Musharraf issued the National Reconciliation Ordinance, a graft amnesty that benefited over 8,000 people.

The amnesty was part of a secret deal between Musharraf and Bhutto that facilitated the latter's return to Pakistan from self-imposed exile.

Fawad Chaudhry, a Special Assistant to the premier, said in a message posted on Twitter that today's developments in the court had led to a "win win situation" for the government and the judiciary.

The former Attorney General's letter would be revoked though the cases against Zardari would "remain dormant", he tweeted.

Ashraf told the bench that he would abide by his commitment to find a solution to the issue of the graft cases.

After reviewing all aspects of the matter, he said he had decided to revoke the letter written by the former Attorney General and asked the Law Minister to take necessary steps.

The premier said he wanted a solution that protects the dignity of both the apex court and the President.

He further said the case involves the position of the President and not Zardari personally, and hoped that the apex court would "exercise caution".

The bench told the premier that the draft letter should be presented in court at the next hearing.

The court should be formally intimated after the Swiss Attorney General was informed of the latest developments, it said.

The court said there should be no more unnecessary delays in the matter and the government should finalise the draft letter in two to three days.

Following a request from Ashraf for more time to draft the letter, the Supreme Court adjourned the case till September 25.

The bench also accepted Ashraf's request to be exempted from future hearings.

"It is necessary we should be fully satisfied that the requirement of the order is fully met," judge Khosa said.
Continue FREE with Ads Pay Rs. 1 to Read Without Ads
READ MORE IN:
Asif Ali Zardari Justice Malik Mohammed Qayyum Raja Pervez Ashraf International
Next Story : Rupee Ends Flat at 54.01 Against Dollar
Download the Outlook ​Magazines App. Six magazines, wherever you go! Play Store and App Store