Will 'Hang' Even Badals If Found Guilty of Sacrilege, Says Amarinder Singh 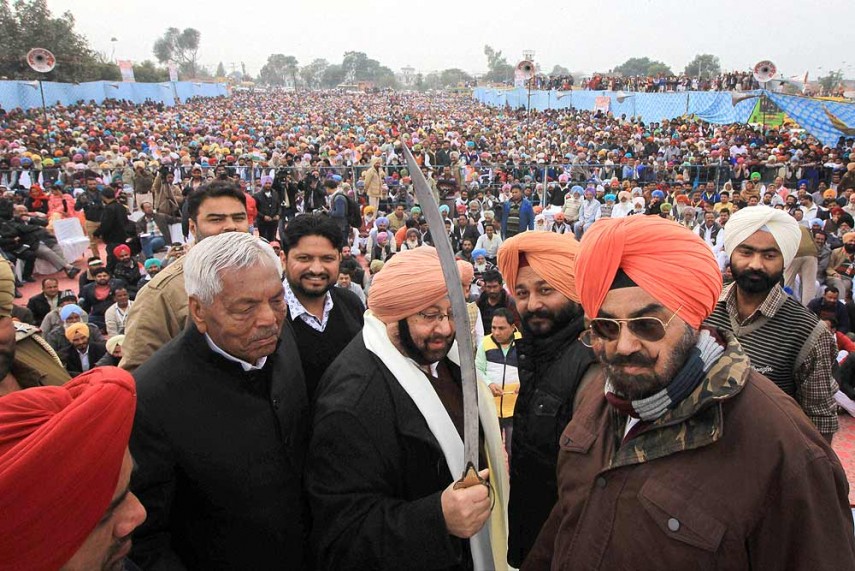 Print
A
A
A
increase text size
Outlook January 16, 2017 13:32 IST Will 'Hang' Even Badals If Found Guilty of Sacrilege, Says Amarinder Singh

Accused by AAP of being soft on the Badals, Amarinder Singh today said if elected to power, he would not shy away from "hanging" those guilty of sacrilege and drug mafia even if it is the "Badals themselves", evoking a sharp reaction from the ruling party which said the Punjab Congress chief had gone "berserk".

Amarinder said, if his party is elected to power in next month's assembly polls, he would launch immediate inquiries into all incidents of major crimes such as religious sacrilege, as well as the drug and other mafias.

"I will hang the guilty from their heads, even if it is the Badals themselves who are found to be implicit in such crimes," he said while addressing a rally here after paying obeisance at Mehraj gurdwara in Rampura Phul.

Hitting back, SAD secretary and spokesman Daljit Singh Cheema said "from the tone and tenor of the statement, it becomes clear that sensing crushing defeat, Amarinder has gone berserk".

"His statement shows that he had no positive agenda except vendetta politics in which he indulged during the previous tenure as chief minister," he said.

The SAD spokesperson asserted that party leaders are not afraid of "bogus threats" and Amarinder should stop day dreaming of becoming chief minister.

Amarinder also also attacked Kejriwal, describing him as a "small and sneaky man" who did not have the guts to fight him on the electoral battleground.

"Punjab does not tolerate cowards like the AAP leader", said Capt Amarinder, adding that if left to AAP or the Akalis, Punjab will never be able to restore its lost pride and glory.

Challenging Kejriwal to fight against him from Lambi constituency, he said "AAP is a party of outsiders which is getting outsiders to campaign and coordinate the elections since they did not have any trust or ties with Punjabis."

He said he would ensure that Kejriwal does not succeed in taking over the state, with which he has no connect.

He said he has decided to fight Chief Minister Parkash Singh on his home turf Lambi to free Punjab from the clutches of the Akalis, who had been "looting" the people of the state for the last 10 years.

Amarinder charged the Badal family with trying to inflame communal passions to polarise voters by not getting a proper investigation done into the cases of religious sacrilege in the state in recent past.

Referring to the problems faced by Punjab under "10 years of Badal misrule", Amarinder pledged to fulfil all the promises made by him and his party, including farm debt waiver, for which 33 lakh people had signed forms.

He promised to bring industrial growth back on its track and reiterated his commitment to continue with all the ongoing public welfare schemes.

"From power to water to atta-dal scheme, no welfare programme will be stopped by my government," he said.

He reiterated his promise to finish off the drug mafia within four weeks of forming the government.

Continue FREE with Ads Pay Rs. 1 to Read Without Ads
READ MORE IN:
Amarinder Singh National
Next Story : Petrol Price Rises By 42 Paisa Per Litre And Diesel By Rs 1.03 A Litre
Download the Outlook ​Magazines App. Six magazines, wherever you go! Play Store and App Store