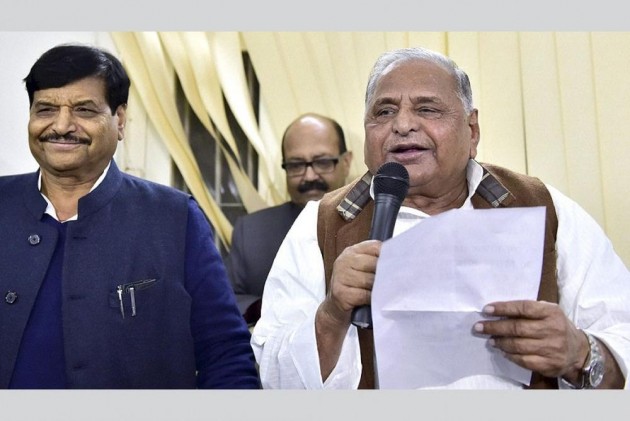 Blaming SP chief Akhilesh Yadav for the party's losses in the UP Assembly and Lok Sabha polls, senior leader Shivpal Yadav said today that he would form a new front unless the reins of the organisation were handed over to Mulayam Singh Yadav.

He also claimed that corrupt persons and officials had joined hands with the government during the previous regime when Akhilesh was the chief minister and the same thing was happening in the present dispensation.

Shivpal said he would meet Chief Minister Yogi Adityanath and apprise him of the situation.

"Akhilesh had promised to hand over the party to 'netaji' (Mulayam). He should now do so and we all will strengthen the SP. I had also given him three months' time. Otherwise, I will constitute a new secular front," Shivpal said at a press meet here.

The Samajwadi Party had witnessed a bitter feud between uncle Shivpal and nephew Akhilesh in the run up to the Uttar Pradesh Assembly polls in which it was drubbed by the BJP .

At the press conference today, Shivpal also alleged that the police had been harassing people in his assembly constituency of Jaswantnagar.

"When corrupt persons and officials join hands with government, harassment of people begins and such a thing had happened in the previous government. It has also started in the present regime. I will meet the chief minister and apprise him of the situation," he said.

Shivpal hit back at SP leader Ram Gopal Yadav who had accused him of not having read the party constitution and said that Akhilesh cannot give party president-ship to anyone as the SP general body had elected him.

"Those who are teaching me party's constitution should read Gita. Everyone knows who made the party (SP) and built it," Shivpal said adding that for him 'netaji' was everything.

Those who are claiming themselves to be samajwadis had distributed tickets in Lok Sabha polls and the party won only 5 out of 80 seats in the state, he said.

"Because of them, in the Assembly polls too the party's tally came down to 47 from 227 in the 403-member House. They should themselves analyse," he said attacking Akhilesh.

Shivpal had recently said he would soon launch a campaign to unite the "samajwadis" (socialists) to bring them on a single platform.

Following a bitter feud between the father and the son, Akhilesh had snatched reins of the party from Mulayam Singh and their fight also reached the Election Commission.

He also mentioned an incident of alleged atrocity on people in Vaidpura and Kahaijo area in Etawah and said he would continue his fight against land mafias and those involved in corrupt practices.