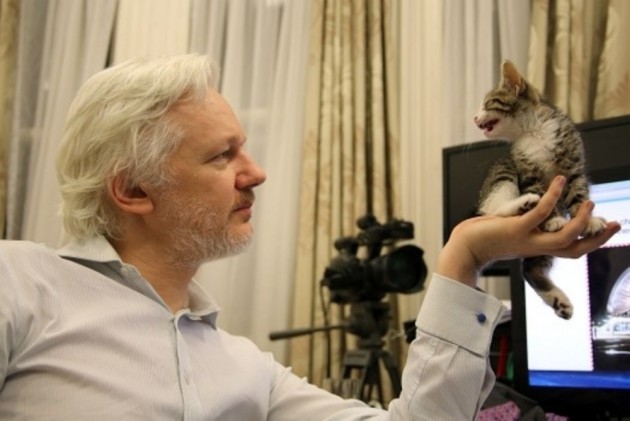 WikiLeaks has appealed for leaked White House documents before President Barack Obama leaves office, as its founder Julian Assange again denied Russia was the source of hacked Democratic party emails that hurt Hillary Clinton's bid for the US presidency.

"System admins: Don't let the White House destroy US history again! Copy now, then send to WikiLeaks at your leisure," the secret-spilling website announced on Twitter, shortly before Assange gave an in-depth interview to US network Fox.

"We are issuing a US$20,000 reward for information leading to the arrest or exposure of any Obama admin agent destroying significant records," the tweet said.

Assange gave Fox an extended interview at the Ecuadoran embassy in London where he sought refuge in June 2012 to escape extradition to Sweden for questioning about an alleged rape.

He shed no light on who provided Wikileaks with thousands of hacked emails from the Democratic National Committee and from Clinton campaign chief John Podesta.

WikiLeaks released the documents during the US election campaign in what US intelligence reportedly concluded was an attempt by Russia to tip the election in favor of Clinton's Republican rival, Donald Trump, who went on to win the White House.

Assange insisted, however, that no Russian government-linked party was the source of the hacked material.

"The source is not the Russian government. It is not state parties," the 45-year-old Australian told Fox.

Pressed as to whether he thought the leaks of the Podesta and DNC emails led to Trump's election in November, he said: "Who knows, it's impossible to tell."

"But if it did, the accusation is that the true statements of Hillary Clinton and her campaign manager, John Podesta, and the DNC head Debbie Wasserman Schultz, their true statements is what changed the election."

He said his organization was not political in nature but aimed to provide facts governments do not.

"We have a perfect record, authenticating the information we publish," Assange said. "We try to preserve that reputation. What else do we have a record for?"

Assange is wanted for questioning in Sweden into allegations by a woman who accused him of rape during a 2010 visit to Stockholm.

He has denied the allegation, insisting they had consensual sex.

He has refused to travel to Sweden for questioning, fearing he would be extradited to the United States over WikiLeaks' release of 500,000 secret military files on the wars in Afghanistan and Iraq in 2010.