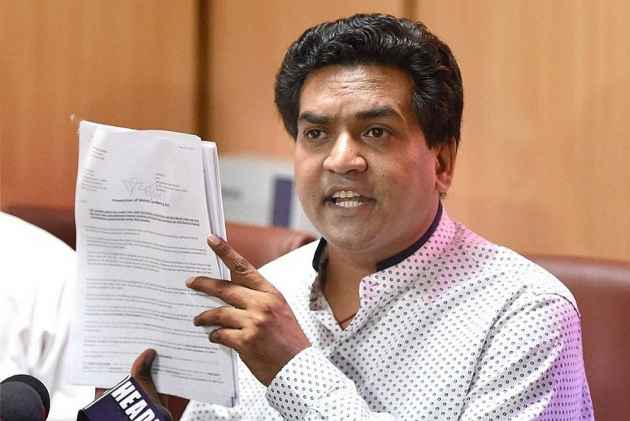 Mishra who is adamant on exposing the alleged scams in the AAP cadre, took to the Twitter and hinted his day's agenda while pointing fingers at two leaders of Kejriwal bandwagon.

Mishra, whose vociferous campaign against the Delhi Chief Minister continues in full steam, entered its third round on Friday as he leveled a new set of charges against Kejriwal.

Mishra dropped another bombshell on friend-turned-foe Kejriwal claiming that the party received money through 'hawala network'.

Mishra showed a powerpoint presentation in a press conference as 'evidence' to back his claim that the party received funds from shell companies.

"Arvind Kejriwal is keeping quiet despite me providing clinching evidence of his corrupt practices. I have also presented evidence on the Hawala case last Sunday. It been one week, but no one from the AAP has come up with any clarification. It is evident from this presentation how AAP forged letter heads to shell companies. Even the letter heads were fake," he said.

Mishra also challenged Kejriwal to inform the Income Tax Department that the donation amount received by AAP was from Mukesh Kumar.

"I will prove two things. Aam Aadmi Party gets fund from Hawala operators...They are avoiding my questions. The video which was tweeted by Kejriwal on Twitter on Thursday was fake. The Letterhead of companies, who gave donation to Aam Aadmi Party are forged. I challenge Arvind Kejriwal to tell Income Tax Department that the donation was received from Mukesh Kumar. Mukesh Kumar's company is a bank defaulter. How can he donate Rs 2 crore to Aam Aadmi Party?" he added. (ANI)