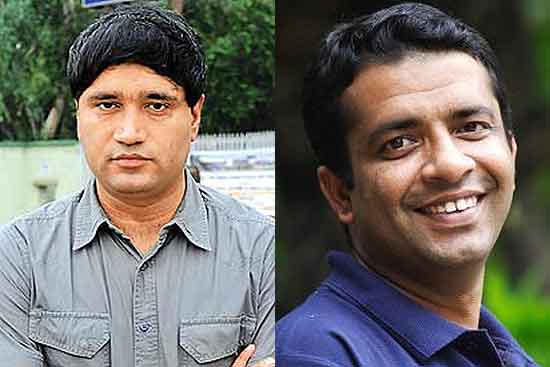 Whistleblower bureaucrat Sanjiv Chaturvedi, who had initiated probe into alleged scams at AIIMS before being booted out as its Chief Vigilance Officer, and founder of NGO Goonj, Anshu Gupta, were today chosen for the prestigious Ramon Magsaysay Award for 2015.

40-year-old Chaturvedi, an Indian Forest Service officer and currently the deputy secretary of AIIMS, has been selected for the award under the 'Emergent Leadership' category for his "exemplary integrity, courage and tenacity in uncompromisingly exposing and painstakingly exposing corruption in public office"

Gupta, who left his corporate job to start Goonj in 1999, has been selected for the award for his creative vision in transforming the "culture of giving" in India and in reminding the world that true giving always respects and preserves human dignity. Goonj collects used clothes and household goods and distribute them to the needy.

In his reaction to announcement of the award, Chaturvedi, said the recognitiion was a "strong morale booster" for honest officers and added that he was able to "survive" only because of an "independent judiciary".

Chaturvedi said he was hugely disappointed with the PMO and that he had taken action in a number of graft cases allegedly involving "powerful" people, getting inspiration from the Prime Minister's slogans like 'na khaunga, na khane dunga' (neither will I take bribe, nor will I allow anyone to take bribe).

"There should be a zero tolerance to corruption and not against honest officers. I am hugely disappointed with the functioning of PMO as I worked with policy of zero tolerance as espoused by the Prime Minister. I took this message to heart and took considerable personal risks to break corruption in AIIMS," he said.

Chaturvedi, who has has been transferred 12 times in the last five years, had taken on land sharks during his stint in Haryana Government.

He said though he had sent "documentary evidences" to the PMO on the alleged irregularities in AIIMS seeking a fair probe to punish the culprits, nothing was done and the harassment against him "accentuated".

Announcing the award, the Ramon Magsaysay Award Foundation (RMAF) also credited Chaturvedi for his "resolute crafting of programme and system improvements to ensure that government honourably serves the people of India."

Chaturvedi was removed in August last year from his post of Chief Vigilance Commissioner at AIIMS. He had alleged that he was transferred because he had detected irregularities at the institute.

Delhi Chief Minister Arvind Kejriwal, who was also given the award, had written to the Centre in February seeking Chaturvedi's transfer to Delhi government. The Centre is yet to take a call on the request.

Goonj's Gupta said the award was a recognition of works of thousands of volunteers of the NGO.

"There are three basic needs of a human life-food, cloth and shelter but unfortunately cloth has become a charitable commodity. We wanted to make it a development subject, something which the government agencies really need to take care of.

"We don't just need disaster management for natural disasters we need to realise that poverty itself is a big disaster and there is a long way to go in managing relief from it," he said.

Three others who have been selected for the award include Kommaly Chanthavong from Laos, Ligaya Fernando-Amilbangsa from Philippines and Kyaw Thu from Myanmar, the board of Trustees of the Ramon Magsaysay Award Foundation (RMAF) announced.

It celebrates the memory and leadership example of the third Philippine President after whom the award is named, and is given every year to individuals or organisations in Asia who manifest the same selfless service and transformative influence that ruled the life of the late and beloved Filipino leader.

The 2015 Magsaysay awardees join the community of 307 other Magsaysay laureates who have received Asia's highest honour till date.

This year's Magsaysay Award winners will each receive a certificate, a medallion bearing the likeness of the late President, and a cash prize. They will be formally conferred the Magsaysay Award on August 31 at the Cultural Center of the Philippines.

Besides Kejriwal, former IPS officer Kiran Bedi, activist Aruna Roy are among other Indians who have received the award in recent years.