When Jinnah Took On Cong at Patna's Gandhi Maidan 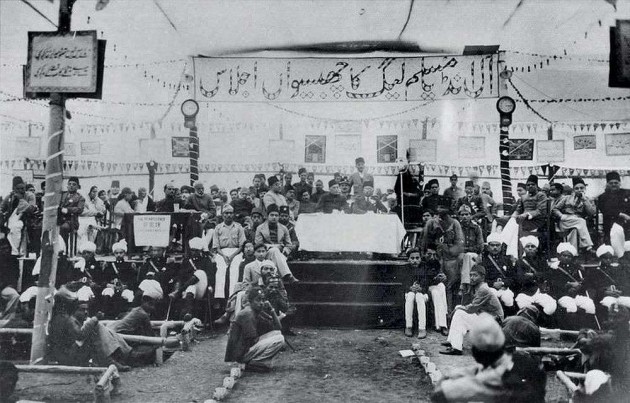 Print
A
A
A
increase text size
Outlook November 17, 2013 22:06 IST When Jinnah Took On Cong at Patna's Gandhi Maidan

Serial bomb blasts at Patna's Gandhi Maidan may have drowned BJP's 'Hunkar' for change in the country's regime, but 75 years ago, the same historic venue had hosted Muhammad Ali Jinnah, whose fiery speech against Congress had lifted the fortunes of his Muslim party.

At the 26th Annual Session of the All-India Muslim League from December 26-29, 1938, Jinnah's voice echoed through the Maidan as he took on Congress while spelling out a roadmap for his party ahead.

“So far as the masses were concerned, and so far as my dear young friends the Muslim youth were concerned, they were all hypnotised by the Congress falsehood. The youth believed their slogans and catchwords. They were caught right in the net...

"They were led to believe that the question was really an economic one and that they were fighting for dal bhat (food), for the labour and the kisan (farmers). Their pure, untutored minds became easy victims of the Congress net," Jinnah had said in his presidential address at the session.

Patna Lawn, as the Maidan was then called, was bedecked with shamiana and festoons to play host to the Quaid-e-Azam, who is said to have stayed at the adjoining 'Dilkhusha', Barrister Aziz’s bungalow, as his guest.

Addressing a gathering from all over the country, Jinnah had made an objective assessment of the development of Muslim consciousness and claimed that the League had "succeeded in awakening a remarkable national consciousness".

"You have not yet got to the fringe of acquiring that moral, cultural and political consciousness. You have only reached the stage at which an awakening has come, your political conscience has been stirred."

"You have to develop a national self and a national individuality. It is a big task as I told you, you are yet only on the fringe of it. But I have great hopes for your success," he had said in Patna, according to a Pakistan government portal dedicated to Jinnah.

And, the results began to show as following the meet, provincial leagues were established in every province, the Provincial Assembly elections results bent in the League’s favour and the British Viceroy began to pay attention to it, all of which were acknowledged by Jinnah at the AIML’s next session in Lahore in March, 1940.

"We have made enormous progress during the last fifteen months in this direction... in every bye-election to the Legislative Assemblies we had to fight with powerful opponents. I congratulate the Mussalmans for having shown enormous grit and spirit throughout our trials. There was not a single bye-election in which our opponents won against Muslim League candidates," he said at the Lahore session.

In the December session at Patna, Jinnah had also appointed a Central Women's Committee, with sister Fatima Jinnah as convener, for drafting a programme for the social, economic and cultural uplift of women.

"It is of very great importance to us... to give every opportunity to our women to participate in our struggle of life and death. Women can do a great deal within their homes, even under purdah. We appointed this committee with a view to enable them to participate in the work of the League," he said.

Dressed immaculately in a long coat, churidar pyjama and a pair of golf shoes, Jinnah was his usual striking figure at the venue. In his speech, he had invoked Iqbal, who had died on April 21 the same year.

"Dr Sir Muhammad Iqbal's death is an irreparable loss to Muslim India. He was a personal friend of mine and composer of the finest poetry in the world. He will live as long as Islam will live. His noble poetry interprets the true aspirations of the Muslims of India," Jinnah had said.

On the strife in Palestine he had said, "For defending their homelands, they are being put down at the point of the bayonet, and with the help of martial laws. But no nation, no people who are worth living as a nation, can achieve anything great without making great sacrifices, such as the Arabs of Palestine are making."