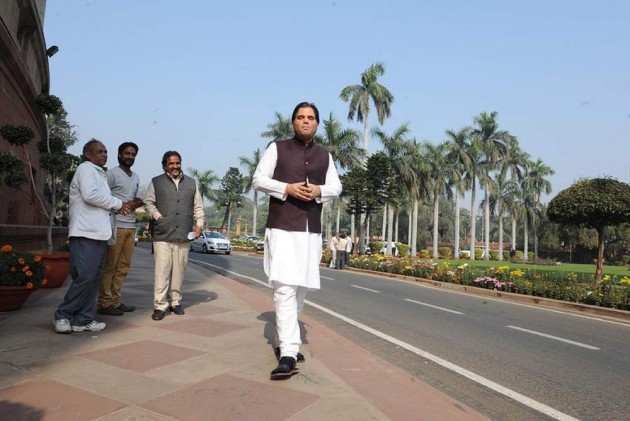 BJP MP Varun Gandhi recalled how he broke down after reading a suicide letter written by the Hyderabad University Ph.D scholar Rohit Vemula before he hanged himself in campus in January 2016, at an event yesterday.

"Rohit Vemula, a dalit Ph.D student from Hyderabad committed suicide last year. When I read his letter, I broke into tears. Rohit wrote that he was taking the extreme step because he had committed the sin of taking birth in such form. This line pained my heart immensely," Varun said.

He was delivering a lecture on the "Ideas for a new India", organised by a private school here.

Rohit's suicide had kicked up a huge uproar across the country, with many dalit organisations and opposition parties holding protests seeking 'justice' for the deceased.

Notably, Union minister and BJP leader Bandaru Dattatreya was booked along with others for allegedly abetting Rohit's suicide.

Varun (36), who represents Sultanpur seat in Uttar Pradesh, also referred to an incident pertaining to discrimination with dalits, which had occurred in Tikamgarh in Madhya Pradesh last month.

"Seventy per cent kids in a school didn't eat their lunch under the mid-day meal scheme for quite some time as the food was cooked by a woman belonging to a weaker section.

"What are we teaching our kids? After all, where is this country and world heading for?" he asked.

Varun said though Constitution didn't discriminate along the caste and religion basis, "the fact is 37 per cent dalits in the country are Below Poverty Line (BPL)."

He said 8 per cent dalit children die before celebrating their first birthday.

"Dr Bhimrao Ambedkar had said we don't need political democracy but social democracy. His thought was way ahead of his time," the BJP leader said.