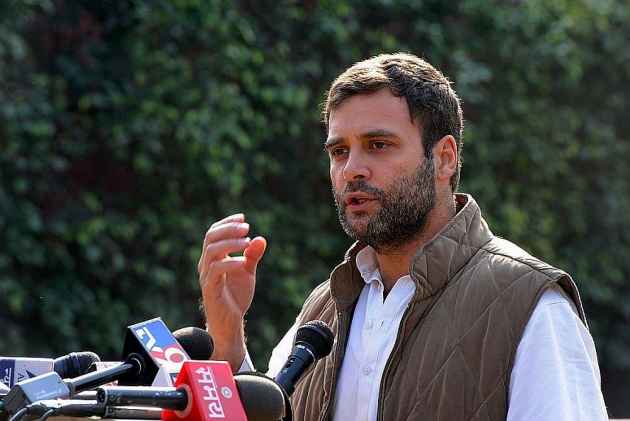 Print
A
A
A
increase text size
Outlook May 16, 2017 12:00 IST What Exactly Is The Govt Celebrating? Rahul Questions 'Modi's Three Year' Festivities

Mocking the grand celebrations planned by the Bharatiya Janata Party (BJP) marking its third anniversary, Congress vice-president Rahul Gandhi on Tuesday slammed the merrymaking at a time when the condition of the country is only deteriorating.

Rahul tore into the Centre by taking to Twitter and posted screenshots of stories announcing 'Modi fest' to mark government's anniversary and questioned the government of what it was celebrating exactly.

Hitting out at the government over the deteriorating situation of the country, Rahul said, "Youth are struggling to find jobs, farmers are committing suicide & soldiers are dying at the border. What exactly is the Govt celebrating?"

Youth are struggling to find jobs, farmers are committing suicide & soldiers are dying at the border. What exactly is the Govt celebrating? pic.twitter.com/327xm48Wgs


Planning for a grand celebration on its third anniversary, the BJP is all set for a humongous 15-day grand merrymaking starting from May 26 to June 15.

The government will also launch a new campaign under the name 'New India' on May 25.

Stretching for over a fortnight, the celebration will begin with Prime Minister Narendra Modi addressing the nation on May 26 in Guwahati.

The Prime Minister will then visit four other cities of India. The four cities might be out of these five cities, namely - Bengaluru, Delhi, Jaipur, Kota, Kolkata and Pune.

The celebration will take place in 900 cities across India and every minister will visit four cities each. Also 'Sabka Saath, Sabka Vikaas' programme will be held in 500 cities.

Prime Minister Modi will also be writing two crore letters to common people. 10 crores SMSs will be done within a span of 15 days.

Also, on May 26, first page of 400 newspapers will carry advertisements displaying the Centre's achievements.

There will be 30 and 60 seconds advertisements on television and radio as well.

It is also expected that 'Bharat Ubhar Raha Hai' will be added to the party's tag line 'Desh Badal Raha Hai'.

On May 27-28, all the Cabinet ministers will be briefing the media. They will also be meeting non-political people.

The BJP will be holding 300 multimedia exhibitions in the states where its holding is not strong and in those states which are in queue for elections.

Every ministry will launch a booklet of its achievements, under the name 'Then and Now (UPA and NDA)'.

On the other hand, the Congress Party is planning to deploy its senior leaders to highlight the failures of the NDA Government.

According to sources, senior leaders of the Congress are likely to address the media for 10 days to highlight failed political, economic, defence, and security related policies of the Centre.