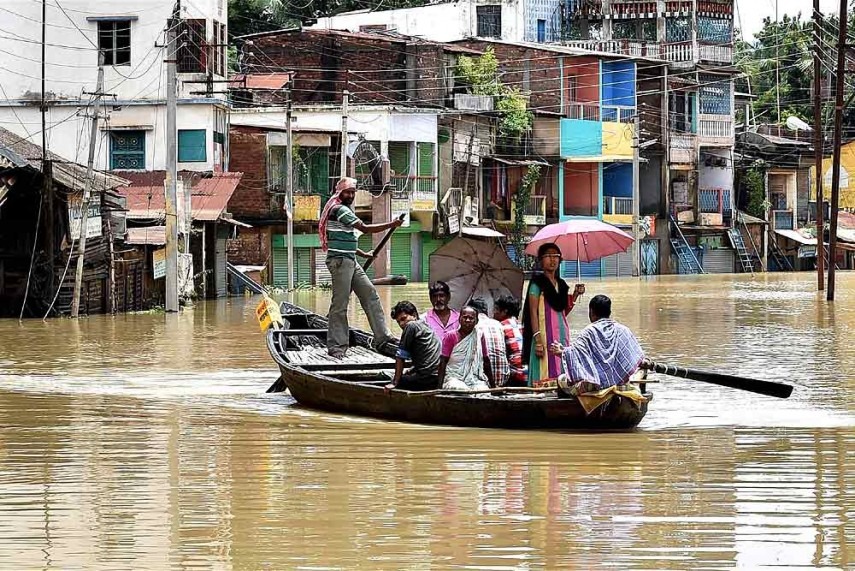 The flood toll in West Bengal rose to 39 today with the death of five more persons even as the situation improved due to less rainfall and the water level of rivers receding.

Five more persons have died in the last 24 hours in the flood-hit of the state, a senior official of the state Disaster Management department said here.

"Out of the 39 death, 19 died by drowning, three due to electrocution, five each died due of wall-collapse, lightning and snake bite while two after their boat sunk," the officer said.

"The situation is improving slowly mainly because less water was released from the dams and also less rainfall in the last few days," he added.

In the 14 flood-hit districts, around 27 lakh people in 106 blocks were badly affected by the flood. The administration opened around 311 relief camps where over 47 thousand people have taken shelter, the official said.

"Over 16,000 animals have been given shelter in relief camp for animals and we have our veterinary doctors there to look after those animals.

"We have also send medicines, water pouches and other requisites to all the districts. Our BDOs there are supervising the distribution system on their own," he said.

When enquired an official at the state agricultural department said that nearly four lakh hectare of agricultural land have been affected in the floods, adding that nearly two lakh volunteers were already on the job in the rescue operations.

Meanwhile, the state government has already started planning how to help those affected in the flood.

"We are planning to help those affected in the flood by assisting them rebuilding their houses, providing them with drinking water, distributing seeds and supplying them with medical kit, repairing the roads," the government official said talking about their plans in helping the people after water recedes in the districts.