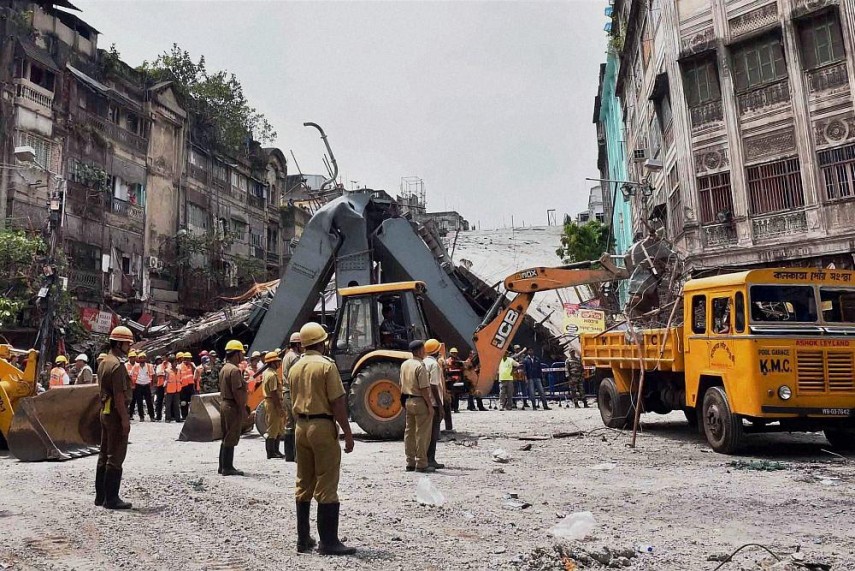 Two more bodies were extricated from underneath the pile of debris of the collapsed under- construction flyover in central Kolkata, pushing the death toll to 26 even as one more official of Hyderabad-based IVRCL engaged in its construction was arrested.

Tanmay Sil, an officer of IVRCL, was arrested during the day when he was trying to flee, police said.

Three senior officials of the construction and engineering company were arrested by Kolkata Police last night in connection with their probe into the mishap.

Kolkata Police disaster management team along with fire fighters extricated bodies of two men from underneath the rubble of concrete, which was possibly part of a small temple at the mishap site, a senior Kolkata Police officer told PTI.

The number of people injured was 89, he said.

"This area is quite critical because of its proximity to residential buildings along the road. We were getting foul smell from underneath the rubble but we have to be very cautious while carrying out the rescue work...A single wrong step can lead to another mishap by bringing down the other part of the flyover," the officer said.

On the identity of the two bodies, he said from their attire they seem to be beggars sitting outside the temple.

A portion of the under-construction Vivekananda flyover, which was reportedly around 60-metre long collapsed on the afternoon of March 31.

Congress Vice-President Rahul Gandhi visited the site and met the injured in hospital during the day.

"There has been a tragedy here. I have come here to give them whatever little support I can provide," he said.

Asked to comment on the allegations of lapses in the construction of the flyover, Gandhi said, "I have come here to meet the injured. I'll not talk about politics."

Later, addressing an election meeting at Niyamatpur in Burdwan district, Gandhi said TMC men got the work contract for the flyover.

"People have died, TMC did not suffer any loss," he said.

Meanwhile, BJP claimed that during her stint as Railway Minister in 2011 Mamata Banerjee knew about Hyderabad-based IVRCL.

BJP national secretary Siddharth Nath Singh said soon after the flyover collapse, Banerjee was quick to say that the work was awarded to the company by the former Left Front government here in 2009 when it was already blacklisted.

"Will the chief minister answer why the Railway Ministry gave the work to the company (IVRCL) for the tunnel project in 2011 when it was already blacklisted and was on the CBI radar following irregularities in house building scam?" he asked.

Singh said after Trinamool Congress came to power in 2011, the government again reviewed Vivekananda flyover project and gave its nod to IVRCL to continue with the work.

"There is a suspicion of a quid pro quo as it was later revealed after the collapse that a company close to the Trinamool Congress was a sub-contractor for the project," he claimed and demanded a CBI probe or a court-monitored probe into it.