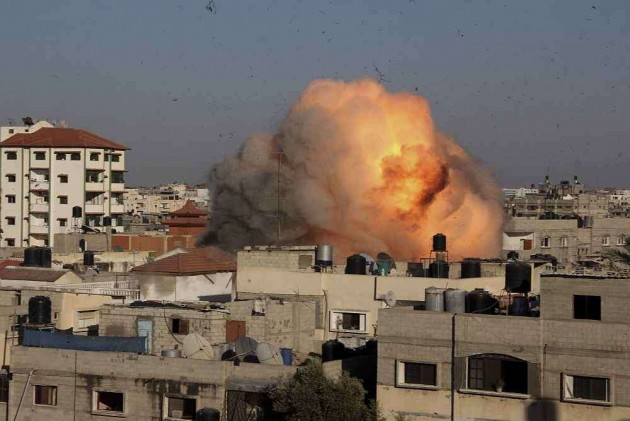 Both Israelis and Palestinians may have committed war crimes during the deadly Gaza war last year that killed over 2,300 people, according to a much anticipated UN report released today which cited "unprecedented number of civilian victims, including women and children".

"The scale of the summer 2014 war — it was a very long and violent war and unprecedented number of civilian victims including, women and children," Doudou Diene, member of the UN Commission of Inquiry (CoI) on the 2014 war said at a press conference here.

The CoI said it had collected "substantial information" and "credible allegations" that both sides had committed war crimes during the conflict.

"The 2014 hostilities saw a huge increase in firepower used in Gaza, with more than 6,000 airstrikes by Israel and approximately 50,000 tank and artillery shells fired. In the 51-day operation, - Palestinian civilians were killed, a third of them children," the Chair of the Commission Mary McGowan Davis, said in a press statement.

The CoI was appointed by the UN Human Rights Council (UNHRC) in September 2014, comprising Canadian academic William Schabas, New York judge Davis and Senegalese Diene, to investigate all violations of international humanitarian and human rights laws in the context of the conflict.

However, Schabas stepped down as chair of the CoI under allegations by Israel of conflict of interest with the commission's work.

The commissioners stated that they are concerned about "Israel's extensive use of weapons with a wide kill and injury radius; though not illegal, their use in densely populated areas is highly likely to kill combatants and civilians indiscriminately".

The report says hundreds of Palestinians were killed in their own homes, including a particularly tragic case of a man who lost 19 members of his family in an attack on Khan Younis in July last year.

Davis also pointed out the case of a man who lost his eight children, mother and brother.

"What can you say to this man in the face of such suffering," Davis said.

"Current accountability mechanisms may not be adequate to address this issue," said the commissioners in the report and urged the international community to actively support the work of the International Criminal Court in relation to the Palestinian territories and to exercise universal jurisdiction to try international crimes in national courts.

In the report, the commissioners urged Israel to "break with its recent lamentable track record in holding wrongdoers accountable".

On the Palestinian side, indiscriminate firing of mortars and rockets were meant to terrorise civilians apart from the discovery of 14 tunnels extending from Gaza into Israel that were used to attack their soldiers during this period, the report stated.

Israel has refused to cooperate with the CoI citing bias of the UNHRC against the Jewish state.

"One of the main difficulties given the challenge we were facing is that we were not able to access, as we wished, the territory concerned on both sides, and to move to meet the victims, and look for ourselves the effect, physical and otherwise, the impact of this war. So this non-access was not a simple thing to overcome," Diene said.

"(Despite the difficulties) We have succeeded, I think, in drafting a global and a precise picture of the war," he added.

The commission conducted more than 280 confidential interviews and received some 500 written submissions. It is scheduled to formally present its report to the UNHRC on June 29 in Geneva.