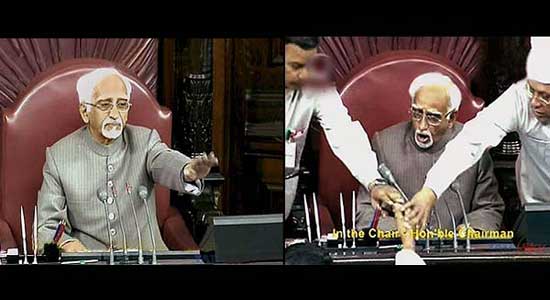 outlookindia.com
-0001-11-30T00:00:00+0553
In an anti-climax, voting on the women's reservation bill in the Rajya Sabha was deferred today with Prime Minister Manmohan Singh likely to call an all-party meeting on the issue tomorrow after Samajwadi Party and RJD threatened to withdraw support to the UPA government.

On a day of dramatic developments, the Constitution amendment bill for reserving one-third of seats in Lok Sabha and Assemblies was tabled in the Rajya Sabha amidst unruly scenes with the opponents of the measure belonging to SP, RJD and an expelled member of the JD(U) tearing the copies of the measure and virtually trying to attack Chairman Hamid Ansari.

After five adjournments, the House was adjourned for the day at 1800 hours without the bill being taken up despite the government having the numbers to carry the legislation through.

But the staunch opponents--SP and RJD which has 25 MPs in the Lok Sabha--sent ominous signals to the government that has important money bills and Budgets to adopt in the Lower House that its majority may be made wafer-thin, just above the half-way mark of 272, if the BSP, which too is opposed to the legislation, also withdraws support.

This was followed by hectic consultations between the Prime Minister and his senior Cabinet colleagues and with leaders of the supporters of the bill--BJP and Left parties-- and with the opponents--Mulayam Singh Yadav and Lalu Prasad together and with BSP's Satish Chandra Mishra separately.

The leaders opposing the bill made it clear to the Prime Minister that their parties would vote against it in its present form without quota for women belonging to OBCs and Muslims and that there was no change.

Though nothing was officially said by the government the leaders came with the impression that the Prime Minister would call an all-party meeting tomorrow, a demand made by the opponents, apparently to discuss a way out for adopting the legislation in a harmonious way.

The opponents of the Bill as also the BJP asserted that the measure should be discussed and voted and cannot be hustled through in uproar, though the Left parties appeared to favour passage without discussion.

After the meeting with the Prime Minister, Lalu Prasad said the opponents could reconsider their views on withdrawal of support if the government brought amendments to the Bill.

Short of a blame game, the BJP and the Left parties said the government should have had a proper strategy to ensure passage of the bill while the Congress attacked the opponents of resorting to disruptive methods which he called as "shame" in a democracy.

Earlier at 1400 hours after two adjourments, the bill reserving one-third of seats in Lok Sabha and Assemblies was moved in the Rajya Sabha for consideration by Law Minister M Veerappa Moily amid unprecedented pandemonium.

SP and RJD members created unruly scenes since morning, forcing repeated adjournments of the House but the government, banking on the support from BJP and the Left, appeared determined to push through with the bill on the centenary of the International Women's Day.

Nand Kishore Yadav and Kamal Akhtar of SP led the combined offensive of his party and RJD. Yadav virtually tried to get physical with the Chairman by uprooting the mike and throwing the stationery placed on Ansari's table even as some other members were seen threatening to reach Ansari's podium.

House security personnel immediately swung into action and shielded the Chairman to prevent the agitated members from climbing on the table.

Akhtar, meanwhile, climbed the table of the Rajya Sabha reporters in front of the Chairman, chanting slogans against the bill, while some members, including RJD's Rajniti Prasad, tore the copy of the bill and threw pieces towards the chair.

Within minutes, Ansari adjourned the House till 1500 hours. After the House was adjourned, engineers immediately fixed the mike.

Apparently fearing repeat of such scenes, the Rajya Sabha staff cleared the tables of the Secretary General as also the House Reporters of items like pen sets and paper weights.

After Law Minister moved the bill for consideration of the House, Ansari adjourned the House as the opponents tried to wrench the mikes in front of him and to grab anything that was on his table.

The day was marked by repeated adjournment of Rajya Sabha, which saw little chance of orderly business and voting on the bill that has been stoutly opposed by parties like SP, RJD, BSP and sections within JD(U).

An electronic watch kept on the Secretary General's table was also removed.

Before the Rajya Sabha reassembled at 1500 hours, marshals were brought into the House and lined up on the two flanks of the Chairman's table.

P J Kurien, one of the members on the panel of vice- chairmen, occupied the Chair only to announce adjournment of the House till 1600 hours. He again adjourned the House till 6 PM when it reassembled.

Significantly, a number of women members of the Lok Sabha were present in the visitor's gallery of the Rajya Sabha to witness the proceedings.

Lok Sabha Speaker Meira Kumar had no less a harrowing time with the House witnessing four adjournments on the same issue- the Women's Reservation Bill, before the Chair called it a day as members opposed to the bill remained unrelenting.

Lok Sabha couldn't function today following the uproar over the contentious bill with SP, RJD, JD(U) members repeatedly trooping into the well to stall the proceedings.

At one time, SP member Shailendra Kumar tore some legislative documents and threw pieces of paper into the well, even as the Chair took up the listed business.

Lone member of the All India Majlis-E-Ittehadul Muslimeen Asaduddin Owaisi too joined the protest, raising slogans against the bill and rushed to the well.

As pandemonium continued, the Chair adjourned the House for the day.

Similar scenes were witnessed throughout the day, as the opponents of the bill in its present form demanded a quota within the quota for OBCs, SCs, STs and minorities.

Speaker Says She Has Refrained From Taking Harsh Action

Anguished over repeated disruptions in Lok Sabha over women's bill issue, Speaker Meira Kumar today said the presiding officer has various alternatives to ensure smooth functioning of the House but has refrained from taking any harsh action.

"The Lok Sabha Speaker has various alternatives to run the House but these have never been put to use as it does not look good," Kumar told reporters outside Parliament.

"This is India's Parliament. All are respectable members, and we do not want to take harsh action as it does not look good," she said.

At one stage, during the proceedings, Mulayam SinghYadav had a verbal spat with Finance Minister Pranab Mukherjee, who is the the Leader of the House. Mukherjee appealed to Yadav with folded hands to end the disruptions.

"What happened in the House is undesirable. Running the House is everyone's responsibility and they should allow the House to function peacefully," the Speaker said.

Kumar said one of the measures to ensure smooth functioning was to request agitating members to take their seats. "They do listen but this time they seem to be very excited. Let us see what happens," she said.

The Speaker evaded a question on whether she would use the services of marshal to maintain calm in the House.