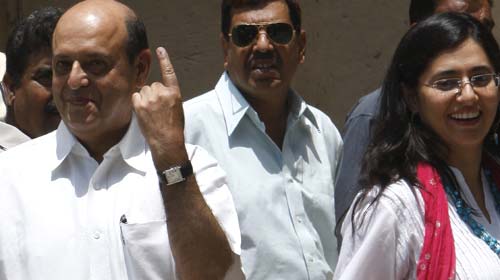 All's well that ends well... Chief Election Commissioner Navin Chawla, with his daughter, shows his finger as he comes out after casting his vote in New Delhi.
PTI Photo by Vijay Kumar Joshi

A clerical error in the voters' list created some confusion when Chief Election Commissioner (CEC) Navin Chawla came to exercise his franchise.

On reaching booth number 86 at Nirman Bhavan in the high profile New Delhi Lok Sabha constituency, Chawla found that his residential address in the voters' list was wrong.

Chawla had written on February 6 last to the Delhi's Chief Electoral Officer (CEO) pointing out that his and his wife's name appeared at two booths in the New Delhi Lok Sabha constituency. He wanted their names to be removed from booth no. 85 of the list and retained in booth no. 86, both in Nirman Bhawan which has the offices of Heath, Rural and Urban Development and other ministries. Following his request, the Electoral Registration Officer (ERO) informed him that their names in booth no. 85 were deleted from the final rolls.

However, still the names of Chawla and his wife Rupika appeared "inadvertently" in photo electoral roll showing their names in both booth no. 85 and booth no. 86, which was rectified later.

"It was a clerical error. The wrong address created some confusion but it was corrected by the poll officials," said Chawla, after casting his vote. His wife and daughter voted as per the corrected rolls.

The CEC appealed to voters to come out and vote as millions of people had put in their efforts for many months to make the electoral process possible all over the country.

"Voting is not only about a candidate or a party, it is also a vote for democracy. Just as an ocean is made of drops of water, democracy is made of every vote. I hope every voter will come out and vote," he said.