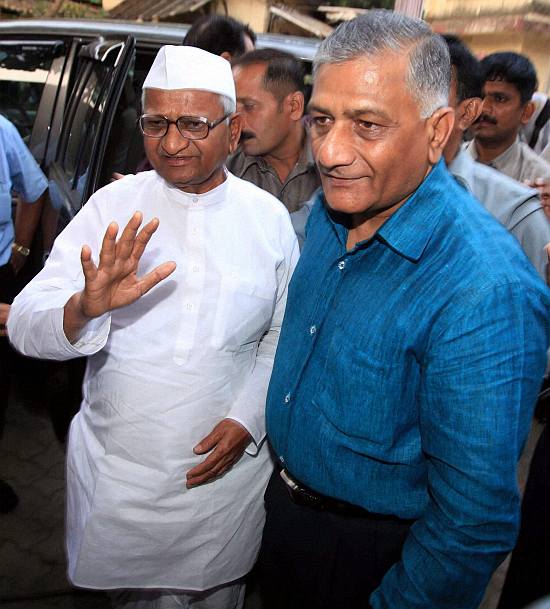 outlookindia.com
-0001-11-30T00:00:00+0553
A new-look Team Anna today mounted a scathing attack on the UPA government and sought immediate dissolution of Parliament, saying the two pillars of democracy were not acting in the manner enshrined in the Constitution.

Addressing a joint press conference here this evening, Singh said the government had taken the controversial decision on FDI despite being in minority.

"As per the Constitution, India is a welfare state in which a democratically elected government is duty bound to protect and improve the lives of the people. However, the current system has completely ignored the directive principles enshrined in the constitution and has surrendered to market forces," Singh said.

"Parliament should be dissolved and fresh elections held," he said, reading from a prepared statement. Hazare endorsed Singh and said they had jointly prepared the statement.

The government policies were being framed to benefit private businesses instead of the common man and no one was raising voice against this in Parliament, the retired general said.

Elections should be held to allow formation of a new government which works for people, he said, adding "Prime Minister Manmohan Singh has ignored the principle of collective responsibility."

On the recent reshuffle in the Union government, Hazare said, "the reshuffle is nothing but misleading the people".

Hazare, who announced launching a year-long campaign from January 30 to create awareness among the people for bringing about a change in the system, said he would support candidates with clean image in the next general elections.

To a query, Hazare said he would support Arvind Kejriwal if he contests polls. "Arvind is a nice man," he added.

Reiterating he would neither form a political party nor contest elections, Hazare said, "we will also not work as a remote control".

"Gen Singh and I will tour the country after January 30. We need to awaken the people," he said.

Asked about the response to his movement, Hazare said, after our nationwide tour, more people would come on streets. "Their number would be even greater than our earlier agitation in August," he said.

The structure of the new movement against corruption was being worked out and modalities will be discussed before Diwali, he said, adding the new team was also in the process of getting an office space in Delhi.

The government is plagued by corruption and caters to private businesses without caring for the people, Singh said and targeted both the ruling combine and the Opposition.

"The opposition and the government have abandoned the people's interest," he said.

To a query, Hazare said he and Singh would not campaign in the Himachal Pradesh and Gujarat polls. "Our target is Parliamentary elections," he added.

On corruption allegations against BJP chief Nitin Gadkari he said, "no one has brought any proof (against Gadkari) before me. I feel a CBI probe would not suffice and there should be a judicial inquiry into wrongdoing of any person, from any party."

Asked about his views on Narendra Modi, Hazare said, "if Modi is good, then why was Lokayukta not brought in Gujarat."

On his scheduled participation at an event organised by the INLD, a partner in the UPA government, Singh said, "the event has been organised to celebrate Devi Lal's contribution and I am going for that, not for INLD."

Asked about Aaamir Khan being roped in his movement, Hazare said the actor had expressed his desire to be associated with it but he has had no contact with him afterwards.

On his views on reports that S Jaipal Reddy was shifted from petroleum ministry at the behest of a major corporate entity, Singh said, "I don't wish to name anyone but my answer to what you asked lies in my statement on the government surrendering to market forces."

Asked what prompted him to join the Hazare-led movement, Singh said, "as someone who hails from a village, having seen problems the country faces, I decided to join the social awakening process."

About resignation of his close aide Suresh Pathare, Hazare said he quit as he had some domestic problems. "I have not received any complaint of corruption".