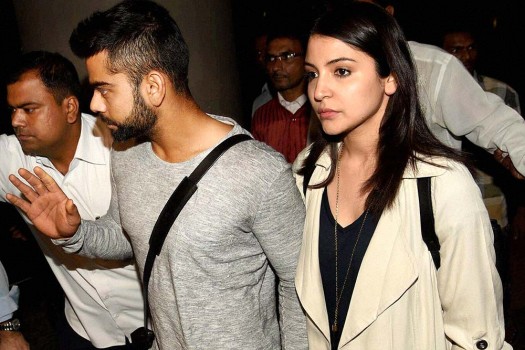 Cricketer Virat Kohli has quashed reports of his engagement with girlfriend, actress Anushka Sharma, saying they are not getting engaged on New Year's Day.

There were reports which suggested that a star-studded engagement ceremony will take place on January 1 in Narendranagar near Rishikesh where the couple are currently holidaying.

The arrival of Amitabh Bachchan in the town along with wife Jaya Bachchan and industrialist Anil Ambani further fuelled the speculation.

However, Virat has now ended the confusion on Twitter and said that when the couple decide to get engaged, they would not hide it.

"We aren't getting engaged and if we were going to, we wouldn't hide it. Simple... Since news channels cant resist selling false rumours & keeping you confused, we are just ending the confusion," Virat posted on Twitter.

The actress and Virat, both 28, arrived at Hotel Ananda in Narendranagar last Saturday to ring in the New Year and have been sharing pictures from their vacation on their social media accounts.

They are said to have visited an ashram at Ambuwala village in Pathri area of Haridwar district on Tuesday to offer prayers.

Anushka has her roots in Dehradun where her grandmother Urmila Sharma still lives.