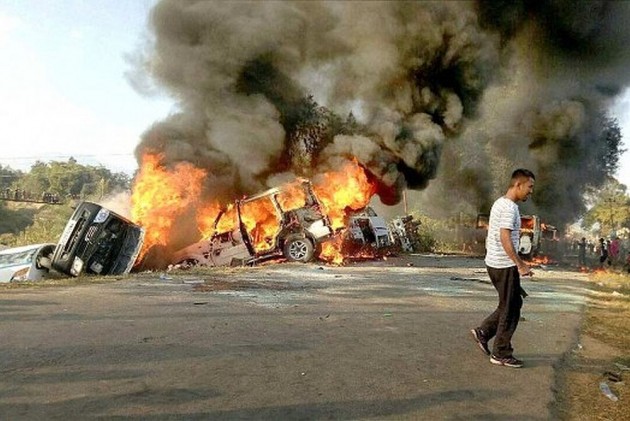 Five columns of armymen were deployed to bring the tense situation under control.

The state has been burning over the issue for over a month. Two tribals have been reported to be killed by police firing, reported Firstpost.

The Regional Transport office and that of the Excise Department were also set ablaze by violent mobs demanding the resignation of Chief Minister T R Zeliang and his entire cabinet for going ahead with the ULB polls despite opposition from powerful tribal groups that are against 33 per cent reservation for women in the municipal bodies, sources said.

Earlier in the day, the Nagaland Tribes Action Committee (NTAC), representing different tribal organisations, had served an ultimatum to Zeliang and his cabinet to resign by 4 pm, remove Dimapur Commissioner of Police and also declare the election process, already under way, null and void.

The NTAC had also submitted a memorandum to the Raj Bhavan in the absence of Governor P B Acharya, who was in Itanagar, in support of its demands. Acharya holds dual charge of the Governor of Arunachal Pradesh.

ULB elections have been due in the state for over 16 years. In 2012, these bodies had pushed the state assembly to pass a resolution not to hold the ULB polls even though an amendment to the Municipality Act 2001 was passed in 2006 providing for quotas to them.

The Zeliang government decided to hold the polls after the cabinet gave the go ahead for it following an interim Supreme Court order in a case filed by the Naga Mothers' Association (NMA) for a directive to the state government to implement 33 per cent reservation for women in the ULBs, like in many other states.

"Making unreasonable and unconstitutional demands such as asking the entire Cabinet to tender resignation when the Ministry has undisputed, unquestionable majority and support of the entire Assembly, is simply unacceptable and non-negotiable," the Chief Minister's Office said in a statement.

Earlier in the day, the Nagaland Tribes Action Committee (NTAC), representing different tribal organisations, had served an ultimatum to Zeliang and his cabinet to resign by 4 PM.

In view of the violence, the Kohima District administration has promulgated prohibitory orders under Section 144 of the CrPC in certain areas including Raj Bhavan, Ministers' Hill, and Jail Colony.

"The Government is of the considered opinion that it has been lenient enough to give in to the demands of the agitators (withholding ULB polls) even though it was steadfastly abiding by the Constitution to which it had sworn its solemn allegiance," the CMO statement said.

Zeliang appealed to all not to indulge in vandalism and arson destroying public properties and spreading fear and panic in the minds of the peace-loving citizens of the state.

The Chief Minister also urged users of social media to desist from spreading rumours as untruths were being fed to innocent people by people with vested political interests.

The statement said MLA of Northern Angami Constituency Neiphrezo Keditsu was forced to tender his resignation as the Chairman of Nagaland State Mineral Development Corporation on moral ground as one of the two persons killed in Dimapur happens to be from his own village.

Apart from him, no other legislator has resigned and Chief Minister enjoys full support of not only the NPF and Independent MLAs but also of BJP legislators, it said.

Continue FREE with Ads Pay Rs. 1 to Read Without Ads
READ MORE IN:
National
Next Story : Ugandan Woman Stabbed to Death in Bengaluru After Brawl Over 'Money for Sex'
Download the Outlook ​Magazines App. Six magazines, wherever you go! Play Store and App Store