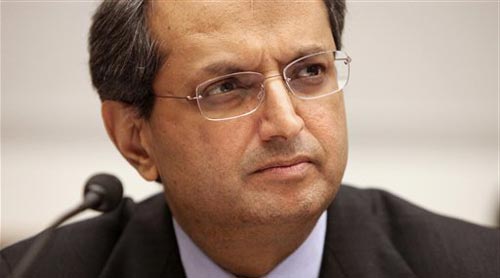 Vikram Pandit, the Indian American CEO of Citigroup, said he will take a salary of 1 dollar a year and no bonus till the banking major returns to profitability.

Appearing before the House Financial Services Committee along with seven other top US CEOs of companies which received bailout fund from the federal government, Pandit said, "My compensation for the year 2008 was my salary, which is one million dollars. I received no bonus. And as I stated earlier, I plan to take a 1 dollar a year in salary and no bonus until we return to profitability."

The top executives Wall Street firms are facing criticism for drawing hefty salary packages amid the growing financial crisis and government bailout worth billions of dollars to put the battered economy on track.

As the CEOs were being grilled by agitated lawmakers during the hearing, the Citigroup CEO said: "We are amidst a once-in-many-generation economic event. And it really is about GDP and unemployment. We need to arrest that."

"We have to stabilise housing. It started there, we need to fix it there, keep people in their homes, avoid foreclosures, try to get that to stabilise," he said.

Pandit said, "We need to make sure we get credit flowing again. And that is clearly a very important part of what the federal government and what the Federal Reserve bank can do."

Responding to a question from Congressman Gresham Barrett, he said: "Let me tell you that we always deal with economics, but there is also an issue of confidence. And I don't have a formula as to how to fix confidence".

"We know what we can do economically. I think confidence is up to all of us here in this room, including the Treasury Secretary and the President and everybody else. And one thing we do know about confidence when broken, you get to fixing it really fast", he added.

Pandit said when it comes to consumer banks and commercial banks, profits and losses are completely tied to GDP and unemployment.

Pandit further added, "One thing that's different about this cycle is that it's not tied in the same way as it was before, which means that it becomes difficult to forecast completely. Having said that, anything we can do to be on the plan to keep people employed and increase the amount of employment can only help us."

When asked by Congressman William Lacy Clay if he envisions credit being freed up, Pandit said: "Everything you're doing -- the plan that Secretary of Treasury talked about yesterday -- all of these are steps to help increase the flow of credit in the US economy."