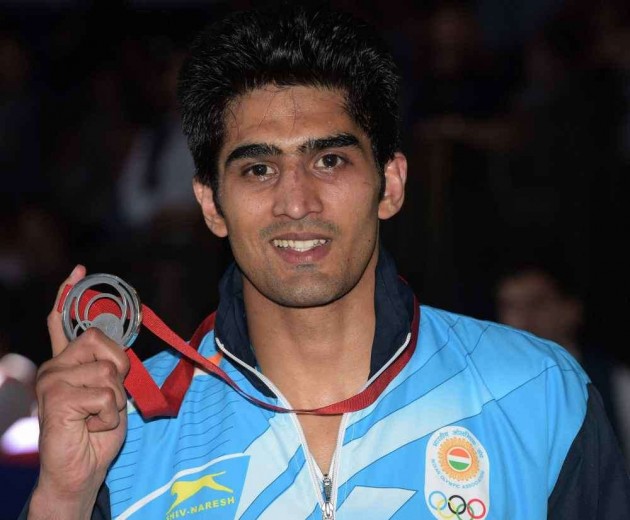 Olympic bronze-medallist Vijender Singh, the country's most celebrated boxer, today bid adieu to his amateur career by turning professional, ruling himself out of next year's Olympics as he no longer remains eligible to represent India.

The biggest name in Indian boxing by a mile after he became the first to bag an Olympic medal -- the 29-year-old today signed a multi-year agreement with Queensberry Promotions through IOS Sports and Entertainment, that will see the middleweight fight a minimum of six times in the first year.

"I'm excited to turn pro and looking forward to the new chapter of my life. I want to train hard and perform for my country at the global level. IOS will be managing my pro boxing career along with Queensbury Promotions with broadcaster BoxNation. My immediate goal will be to work hard and make a good boxing record in the next year or so," Vijender said at a press conference here.

Vijender's professional plunge means he would not be representing India at the Olympics and national coach Gurbax Singh Sandhu has said that it is bad news for the team overall.

"But he is an individual and he is free to decide his career. He must have thought something," Sandhu said.

The International Boxing Association (AIBA) rules on boxers joining professional leagues other than the ones promoted by AIBA clearly state that they become ineligible for amateur competitions.

Francis Warren, heads of Queensberry Promotions - a leading boxing promoter in the UK - said Vijender has it in him to script history in the pro circuit.

"I'm very excited to have brought such a talented and determined individual over to the UK and can't wait to see what Vijender is capable of doing in the professional ranks after achieving so much as an amateur," he said.

"After spending the past week with him in Manchester, there is no doubt in my mind that he has what it takes to be a very successful professional boxer, not only due to his undoubted natural talent, but also due to his drive and focus.

"He has a clear idea of what he wants to achieve and I am over the moon that he will be doing that with Queensberry Promotions and BoxNation," he added.

Speaking on the deal IOS MD and CEO Neerav Tomar said, "It's a historic moment for Indian boxing with Vijender turning Pro. He's a top fighter and is extremely motivated to train hard and perform."

One of India's most successful amateur boxers ever, Vijender was also the country's first to win a medal at the World Championships when he clinched a bronze in 2009.

The 29-year-old from Haryana will now base himself in Manchester, England, under renowned trainer Lee Beard, who has previously worked with British boxing legend Ricky Hatton.

Stating that the move marks a new chapter in his career, Vijender said after competing in three Olympics he now aims to prove a point at the international stage.

"I have played three Olympics and did my best and won bronze. I want to prove that Indian boxers can do well in pro boxing as well. It is still all about the nation," he said.

"It's a new beginning and I want to represent my country at an international level.

"It is great to be in the UK. I am ready to work and train hard and give my best to this new chapter of my life. My immediate goal will be to work hard and make a good boxing record in the next year or so," the Vijender added.

Speaking about the possible reactions of his fans and boxing community over his decision to turn professional, Vijender said: "They are my fans, they love and support my every decision.

"There will be both negative and positive reactions about this decision, but I am clear that my country comes first. This move is not just for myself."