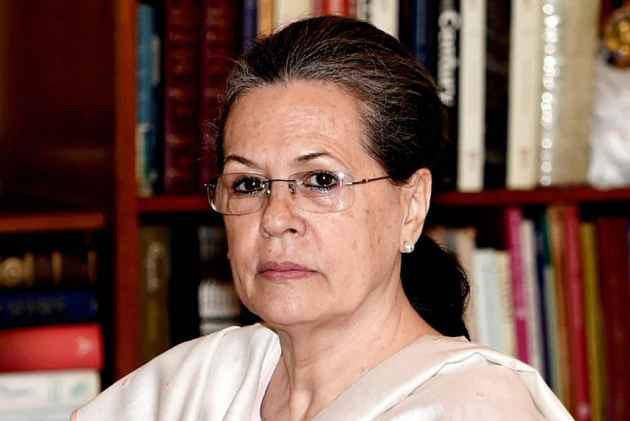 Slamming the "culture of vigilante violence", Congress President Sonia Gandhi today said it was being "actively supported" by those who are supposed to enfore the law and that the nation was facing a great challenge in the form of "domestic misrule".

She said India has reached "a crossroads marked by increasing threats of authoritarianism and bigotry" and the "inclusive conception" of the country was "under attack".

"We are in a war of ideas. We wage this war to preserve our ideals, which have built India up as a model of democracy, diversity and co-existence. When these ideals are threatened, India itself is in danger. And if we do not raise our voices, if we do not speak up, our silence will be taken as consent," Gandhi said.

She said the press was being "pressured to obey and applaud" rather than to question and speaking the truth was the imperative of the present age.

Gandhi was speaking at a function here where President Pranab Mukherjee released a commemorative publication of the National Herald newspaper, which was run by the Congress, on '70 years of India's Independence'.

"The National Herald evokes a time when nationalism fought foreign rule. But domestic misrule is as great a challenge for our country," she said.

"At a time when the inclusive conception of our nation is under attack, and the press is pressured to obey and applaud rather than to question, speaking truth to power is the imperative of our age," she said.

All this, she said, was "being encouraged by a culture of vigilante violence actively supported by those who are supposed to enforce the law. Such examples assault our consciousness almost daily."

The Congress chief said the 'National Herald' was a reminder of "what is precious about the India which its founders fought to free".

The Congress chief called for working together "to safeguard an India in which each person's voice can be raised and heard -- most of all the voices of those who question and disagree."

She recalled the rich legacy left behind by Mahatma Gandhi, Jawaharlal Nehru, Sardar Patel, Maulana Azad and B R Ambedkar, saying it has stood the test of time.

"It is the irony of present times that their work is now sought to be either obliterated or in some cases appropriated by individuals and groups who are in direct opposition to their beliefs and principles.

"Those who stood aside when history was painfully made by sacrifice and struggle, those who, indeed, had little faith in the Constitution adopted by our country, are now seeking to create an India completely at odds with the one that saw the light of Independence on August 15, 1947," Gandhi said.

In remarks apparently aimed at the BJP, she said, "Let us not forget that they made no sacrifices to shape India's destiny."

She said though their language is modern, they seek to take India backward, to further their narrow sectarian vision.

"Their modern jargon conceals pre-modern beliefs, concepts that are at odds with progressive and inclusive thought... It is our duty to pull away the hypocrisy and reveal the reality lurking beneath," the Congress chief said.

Calling for "preserving the flame of our national ideals", she said, "If we accept without scrutiny, without question, without a challenge the fallacies and follies we are witness to today, we will leave for our children a land of injustice, a legacy of trauma, and a country divided and broken."

Gandhi said one has to fight the daunting battle against injustice, against poverty, against prejudice, against patriarchy, against malnutrition, against illiteracy, against communalism -- "but we must also prevail in this greater war for the soul of our nation".

"Ours is a mission to preserve the credibility and sanctity of our institutions in their democratic design", she said, adding "we must fight for Mahatma Gandhi's ideas of truth, Jawaharlal Nehru's celebration of pluralism, Sardar Patel's vision of unity, Dr Ambedkar's legacy of social justice."

Continue FREE with Ads Pay Rs. 1 to Read Without Ads
READ MORE IN:
Sonia Gandhi National
Next Story : Gangraped in 2008, UP Woman Attacked With Acid For Fifth Time Even As Yogi Adityanath Directed Swift Action The Last Attack
Download the Outlook ​Magazines App. Six magazines, wherever you go! Play Store and App Store