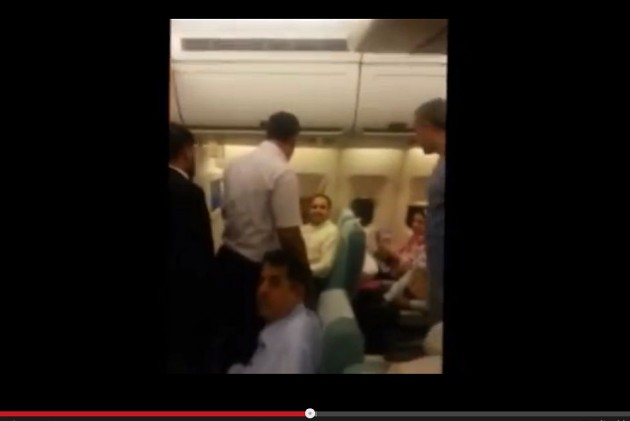 Angry passengers on board a PIA flight stopped former interior minister Rehman Malik and a Hindu lawmaker of the ruling PML-N from boarding the plane, accusing them of causing over two hours of delay.

The Islamabad-bound Pakistan International Airlines flight PK-370 from Karachi was delayed by two and a half hours yesterday as it kept waiting for the arrival of Pakistan People's Party (PPP) senator Malik and National Assembly member Dr Ramesh Kumar Wakwani.

When they finally came, the passengers stopped them from boarding the aircraft.

According to a video clip repeatedly shown by the local media, passengers were shouting at Malik who was filmed going back hurriedly when confronted by the passengers.

"Malik sahab, sorry. You should go back. You should apologise to these passengers. You should be ashamed of yourself...250 passengers have suffered because of you. It is your fault, sir," a passenger was heard saying in the clip.

"Malik sahab, you are not a minister any more. And even if you are, we don't care...Anymore," he said.

The clip, which has gone viral online, showed passengers booing and ridiculing the lawmakers as the crew also joined them.

Kumar was not shown in the video but Dawn reported that he was also not allowed to board the plane.

PIA spokesperson Mashood Tajwar speaking to Dawn denied the flight was delayed because of Malik and said that shift manager Nadeem Abro and terminal manager Shehzad Khan have been suspended due to the delayed take-off of PK-370.

"PIA does not promote VIP culture...But this flight was delayed an hour and 30 minutes due to a technical reason," Tajwar said.

After the initial delay which was due to technical reasons, the plane was delayed for a further 15 to 20 minutes and they have been suspended for this delay, he claimed.

"The delay had been conveyed to passengers via SMS. Some passengers who had given the contact details of their travel agent may not have been conveyed the message by their agents," Tajwar said. He said the plane took off at 8:55 pm last night.

"The flight was not delayed because of Rehman Malik. We are looking into what actually happened but after the delay, the flight departed when it was meant to," he added.

Meanwhile, Malik today denied on Twitter he was responsible for the delay while Wakwani told PTI he only reached the airport after informed by PIA staff when the flight was going to take off.

"I had confirmed before leaving for the airport if the flight was on time and when it was delayed, I adjusted my plans accordingly," Wakwani said.