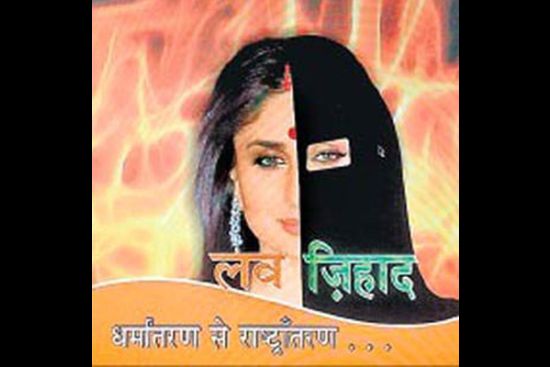 The controversy surrounding "Love Jihad" refuses to die down as the latest issue of a Vishva Hindu Parishad (VHP) magazine Himalaya Dhwani has brought up the subject on its cover using a morphed face of actor Kareena Kapoor half covered with a 'burqa'.

The pictures of Kapoor, who married actor Saif Ali Khan, has gone viral with many raising eyebrows over the raging row over religious conversions and reconversions and demanding action against the magazine.

VHP, however, has claimed that the magazine brought out by its Himachal unit is for internal circulation and has tried to highlight the issue as also religious conversions in Himachal Pradesh.

Congress criticised the use of Kareena's picture, saying it is an assault on her privacy and sought action against the magazine.

The magazine's cover story also reads, "Dharmantaran se rashtraantaran" meaning "change of religion leads to change of nation" in the cover article that has highlighted the issue of religious conversions of Hindu women addressed as 'love jihad'.

Rajni Thukral, one of the magazine editors, who is also the coordinator of Durga Vahini, the women's youth wing of VHP for the region, has defended the article and Kapoor's picture.

"The issue of 'Love Jihad' started in the country some 12 to 15 years ago and there have been 4,000 cases registered on how Muslim boys have allegedly enticed Hindu girls in love and later treated them badly.

"In Himachal, such incidents have happened and 16 such cases have come to light last year. We have tried to highlight the issue to create public awareness," she said.

Defending the use of Kareena's morphed picture and her case to highlight the issue, she said, "Kareena is an icon and role model. Youth try to emulate and follow her."

Thukral questioned if they are in love, why did she have to convert and why Saif did not convert to a Hindu.

The opposition slammed the use of Kareena's face on the magazine cover, with Congress leader Manish Tiwari saying it is an assault on their privacy and the magazine be sued.

"It is an assault on their privacy. They should sue the organisation, because nobody has the right to trifle with anybody's privacy and use anybody's picture without their permission for what is possibly the most outrageous, ridiculous, retrogressive and medieval tendency you have seen manifest itself in the past six months," he said.

Tiwari also said it is high time the liberals stood up in the country so that such tendencies are curbed in society.

However, VHP's joint general secretary Surendra Jain told PTI that the magazine was for internal circulation of the outfit in the state.

"The magazine is for internal circulation of VHP in Himachal Pradesh. How girls are lured by 'Jihadis' has been highlighted through the article.

"It also highlights the issue of Bangladeshi infiltrators coming into Himachal Pradesh and causing law and order and communal violence issues," he said.

BJP spokesperson Nalin Kohli said the issue of religious conversions is not something new and that if there are conversions taking place, people have the right to return.

"That right is there with every individual. You cannot challenge that right," he said, adding that the government has said that there should be a law on conversions and thus these charges don't hold ground against the government or the BJP and the opposition is trying to take political mileage out of the issue.

"They are trying to make political mileage out of this even though when none exists," he said.

Another VHP leader said publications are free to air their views and opinion and if someone has problems they can challenge the magazine through legal means.