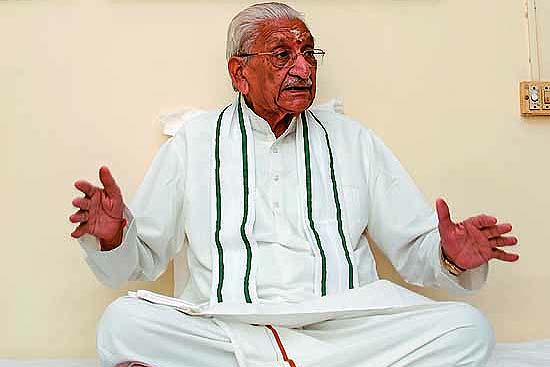 VHP leader Ashok Singhal, who rose to prominence playing a leading role in the Ram Janambhoomi movement in the late eighties and after, died today at a private hospital here.

Singhal (89), who was admitted to Medanta Medicity hospital on Saturday last with complaints of acute breathlessness and other problems, died at 2.24 PM following cardio-vascular failure and septicaemia, VHP International President Pravin Togadia, himself a doctor, told PTI.

A bachelor and an RSS pracharak all his life, Singhal, adopted an aggressive style in the "kar sewak" campaign in the build up to the demolition of the Babri Masjid in December, 1992.

A metallurgy engineering graduate from Banaras Hindu University, he pitchforked the organisation in the Ayodhya Ram temple movement and sought to internationalise it by recruiting supporters and organising branches world wide. The overseas supporters contributed immensely to the VHP campaign.

Singhal was in the Intensive Care Unit under treatment in the hospital after he was diagnosed with right lower Lobe Pneumonia. He was on ventilator from November 14 evening.

A team of specialists comprising Critical Care, Respiratory, Cardiology, Endocrinology, Neurology and Nephrology had attended on Singhal, the hospital had said yesterday.

"The demise of Ashok Singhalji is a deep personal loss. He was an institution in himself, whose life was centred around serving the nation," he tweeted.

He said he was always fortunate to receive Singhal's blessings and guidance. "My condolences to his family and countless supporters," he said.

The Prime Minister noted that Singhal was the force behind several noble deeds and social work, which benefited the poor. "He is an inspiration for generations," he said.