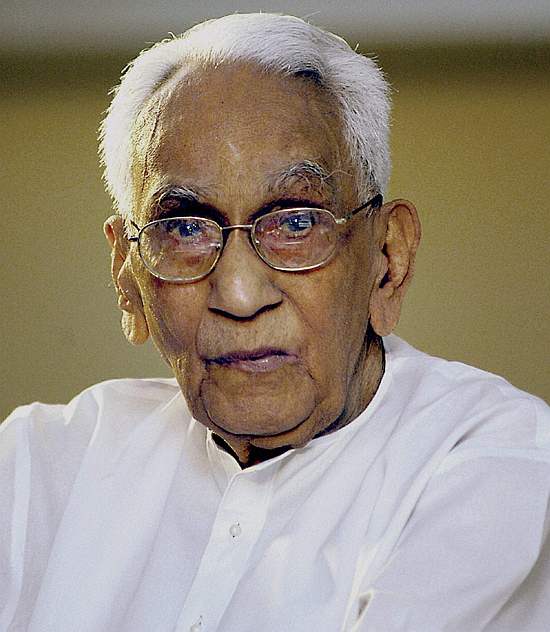 93-year-old Kannoth Karunakaran, who also served as Union Industry Minister under the late P V Narasimha Rao in the 90s, was in hospital since December 10 and breathed his last around 5.30 pm after his condition turned critical yesterday following a stroke.

He is survived by his politician-son Muraleedharan and daughter Padmaja Venugopal who were at his bedside when the end came.

The cremation will be held in Thrissur on Saturday, KPCC President Ramesh Chennitala said.

Karunakaran, who was an ardent loyalist of Indira Gandhi and whose faction in the state Congress was called 'I' Congress, was admitted to hospital with severe breathing problem and fever and was on ventilator support off and on.

Initiated into politics in 1935 at the age of 19, he participated in the freedom struggle, and later took to trade unionism to make a mark in the state politics remaining one of its poles.

A master practitioner of coalition politics, 'Leader' Karunakaran often courted controversies and had to resign as chief minister in his first term within a month in 1977 after the controversial death of Left-leaning engineering student Rajan, who was tortured during the Emergency when he was the Home Minister.

President Pratibha Patil and Union Health Minister Ghulam Nabi Azad were among other dignitaries who condoled the death of Karunakaran.

President Patil today said the country has lost a "visionary" leader in the death of Karunakaran.

In her condolence message, Patil said the nation has lost the "longest serving public figure and a visionary."

Ghulam Nabi Azad said Karunakaran will be remembered for his "kind-heartedness and his down-to-earth behaviour."

A shrewd politician whose career was marked by ups and downs, Karunakaran was active in politics till he was admitted to hospital early this month.

Though his condition showed improvement in the initial days, it turned critical after he suffered a stroke.

Karunakaran, whose wife Kalyanikutty Amma predeceased him 15 years ago, was considered one of the main architects of coalition politics in the tiny southern state.

Considered a close lieutenant of former prime ministers Indira Gandhi and Rajiv Gandhi, he has been credited with creating in the 1970s a rainbow coalition - the United Democratic Front (UDF) - that has sustained itself on the support from different social, caste and religious groups as a powerful bloc to take on CPI(M)-led Left Democratic Front (LDF).

Born on July 5, 1918 at Chirackkal in Kannur district to Ravunnia Marar and Kannoth Kalyani Amma, Karunakaran was an astute politician which earned him the title of 'Chanakya' by his supporters.

Karunakaran gave up school education at an early age and started his political career through the Indian National Congress. A staunch patriot, he had zealously participated in the freedom struggle, as well as in trade union activities.

As administrator, Karunakaran contributed much to the development of the state.

As a veteran parliamentarian, whose career stretches over five decades, Karunakaran was elected thrice to Rajya Sabha, and twice to the Lok Sabha.

He first became Chief Minister in March 1977 but remained in office for about a month as he resigned following stinging remarks from the Kerala High Court in the Rajan case.

The case pertained to the death of Rajan, an engineering student, in a police camp during the Emergency, when Karunakaran was home minister.

Karunakaran, however, returned to the centrestage after the post-emergency split in the Congress as a firm supporter of late Prime Minister Indira Gandhi.

He later became Chief Minister briefly from December 1981 to May 1982 and had a full five year term after the 1987 polls. Though he led the Congress to victory in 1991, he had to quit paving the way for arch foe A K Antony in 1994, in the backdrop of an intense faction feud in the Congress.

His last term as Chief Minister was also marred by the Palmolein corruption case in which he figured as the first accused. Chief Vigilance Commissioner P J Thomas is also an accused in the case, still pending in a vigilance court here, in his capacity as the then food secretary.