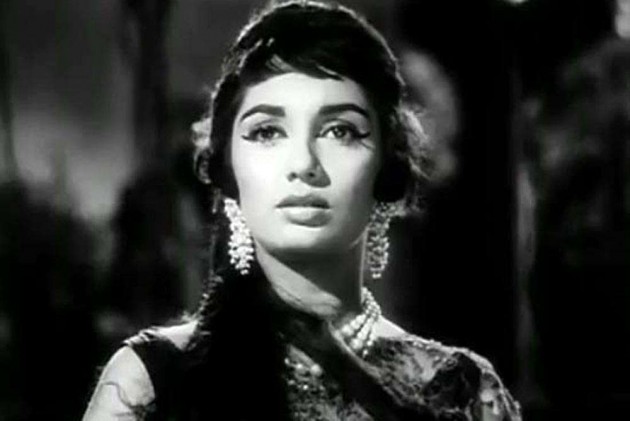 Veteran actress Sadhana, who mesmerised audience with her beauty and powerful performances in timeless hits like Hum Dono, Love in Simla and Waqt, died today at a hospital in suburban Santacruz here after a brief illness.

"She was admitted to the hospital day before yesterday due to high fever. She was okay...

"She had her tea in the morning at around 7.30 AM and suddenly I got a call from her secretary at around 10 AM that she collapsed and passed away. It was sudden and shocking... We were to meet her at 5 pm today. It's sad," Sadhana's close associate and advocate Ameet Mehra told PTI.

Earlier, reports suggested that the 74-year-old effervescent actress died at her residence.

Her last rites will be held tomorrow at a crematorium in Santacruz.

Sadhna Shivdasani, who popularised the fashionable 'Sadhana cut', was one of the top most charming leading ladies of the 1960s and 70s.

Although her prime career spanned over a decade-and-a- half, she was paired opposite all big heroes of her time including Joy Mukherjee, Sunil Dutt, Rajendra Kumar, Manoj Kumar and Dev Anand with whom she shared screen space in Hum Dono and Asli-Naqli.

Also, she worked with top notch directors of that era be it Bimal Roy in Parakh or Hrishikesh Mukherjee in Asli-Naqli.

Born in a Sindhi family, Sadhana was named after her father's favourite actress-dancer Sadhana Bose. Her father was the brother of actor Hari Shivdasani, father of actress Babita.

Sadhana aspired to be an actress since childhood and it was her father who helped her to chase her dreams of becoming an actress.

She had acted in several mystery films, earning the nickname "Mystery girl".

Not only her films but the songs from her movies too are remembered like Abhi Na Jaao Chodkar, Lag Ja Gale, Jhumka Gira Re, Tu Jaha Jaha Chalega, Mera Saaya Sath Hoga and others.

Sadhana retired from acting nearly four decades back as she did not want to be cast as a side-kick or do character roles and chose to lead a reclusive life away from the limelights.

She was honoured with the Lifetime Achievement Award by the IIFA in 2002 for her contribution towards the film industry.