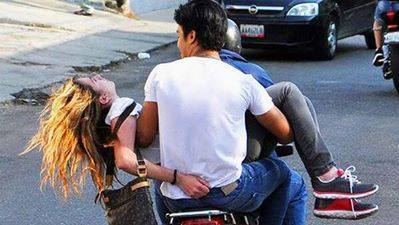 Genesis Carmona, 22 who is a local beauty queen was shot dead in Venezuela - the 5th person to die in violent anti-government protests that have rocked the country.

The model, who was Miss Turismo 2013 for the state of Carabobo, was shot in the head during a demonstration in Valencia.

A marketing student, she was taken to the hospital on a motobike by a bystander where surgeons battled in vain to save her life.

Venezuela has spent a week in the grip of violent protests against the socialist government established by ex-President Hugo Chavez 15 years ago.

Lopez was due to appear in court yesterday to learn if he will face charges for provoking violence against the government.

He has urged his supporters to keep fighting for the departure of Maduro's socialist administration.

This comes a month after a former Miss Venezuela Monica Spear and her British-born partner were shot dead in front of their five year old daughter in an armed robbery.

Continue FREE with Ads Pay Rs. 1 to Read Without Ads
READ MORE IN:
International
Next Story : Another Congress MLA in Gujarat Resigns, to Join BJP
Download the Outlook ​Magazines App. Six magazines, wherever you go! Play Store and App Store