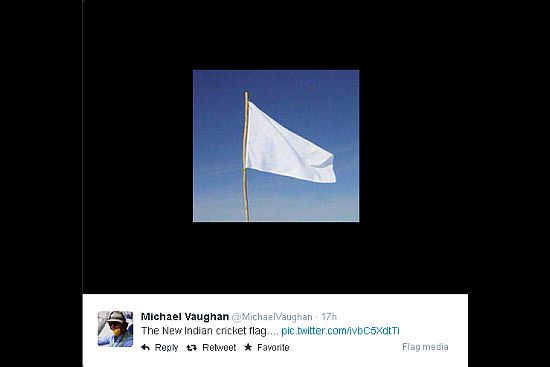 Michael Vaughan took criticism to another level after the former England skipper posted a 'white flag' on his twitter handle, terming it as the new Indian cricket flag after MS Dhoni and Co's abject surrender at the Oval.

Vaughan not only slammed the Indian team for its poor showing after the innings and 244 runs loss at the Oval and the subsequent 3-1 series loss, but also came down heavily on the fans.

Getting behind a 338-run lead on the third day of the fifth and final Test, the Indian batting just caved in as they were shot for for a paltry 94 runs. Even during the 'procession', Vaughan kept on tweeting his celebrations.

After the first Test ended in a draw, India fought back to win the Lord's Test but lost the track after that. Alastair Cook ressurrected his position as a leader after winning the Southampton Test and then a win at Old Trafford. Vaughan said that England now need to aim higher.

"England back on track .. But the real judgment will be at the World Cup and next yrs Ashes... Not against this Rabble who have given Up..," was another of Vaughan's sarcasm laced tweet.

If the Indian batsmen were found wanting on moving pitches then the England bowlers did what they were supposed to do best; take wickets. James Anderson led the pack with 25 wickets in the series followed by Stuart Broad and Moeen Ali -- 19 wickets each. Vaughan was all praise for England's new-ball bowlers.

"IMO @jimmy9 and @StuartBroad8 will be remembered in time as England's greatest ever bowling partnership...!!!" Vaughan kept tweeting.