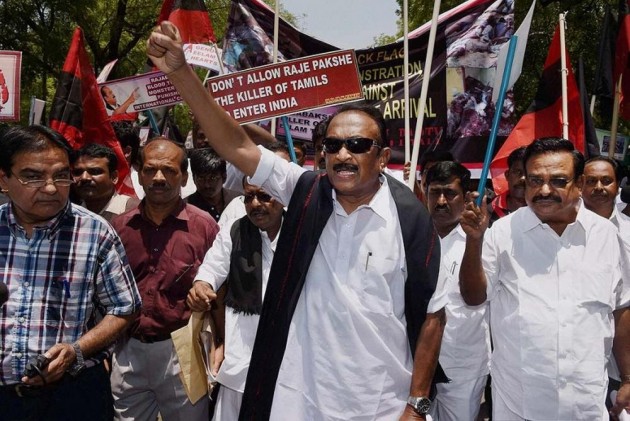 MDMK founder Vaiko was allegedly attacked by DMK supporters on Saturday when he went to visit party president M Karunanidhi at a hospital here, prompting him to return without meeting the veteran Dravidian leader.

MDMK sources said Vaiko's car was pelted with stones and footwear by DMK supporters when he went to visit Karunanidhi, who is undergoing treatment for throat and lung infection.

The incident drew a sharp reaction from DMK treasurer M K Stalin, who described it as "unsavoury", expressed regret and reprimanded those involved.

"I condemn MDMK General Secretary Vaiko being stopped and express regret for this unsavoury incident, which happened when I was not in the hospital," he said in a statement.

Stalin said indulging in such activities against those campaigning against DMK has never been acceptable to Karunanidhi or himself.

He said DMK had members who could face things in a democratic manner and strictly urged his supporters not to indulge in any such activities and maintain peace.

Vaiko had been expelled from DMK in 1993 by Karunanidhi and since then has been a very vocal critic of the party patriarch. (REOPEN MDS14)

Meanwhile, Vaiko alleged that the attack was carried out at the behest of a "DMK leader holding a key party post," but did not name the person.

He alleged that 70 persons, including 10 women, "were assembled" near the hospital to attack him.

Vaiko said he was in the front seat of his car when it came under attack while nearing the hospital. Stones were pelted and footwear hurled at it, he said, adding some wooden logs also fell on the vehicle.

The MDMK leader said he had come to know that Karunanidhi's children, 'brother' M K Alagiri, 'sister selvi' and Kanimozhi's mother Rajathi had regretted the incident.

Recalling Stalin's visit last year to his home when his mother died, Vaiko said he had treated him with respect and dignity.

He, however, asked his supporters not to make an issue of today's incident.

"I do not have the slightest anger or hatred against anyone due to this incident," he said in a statement.