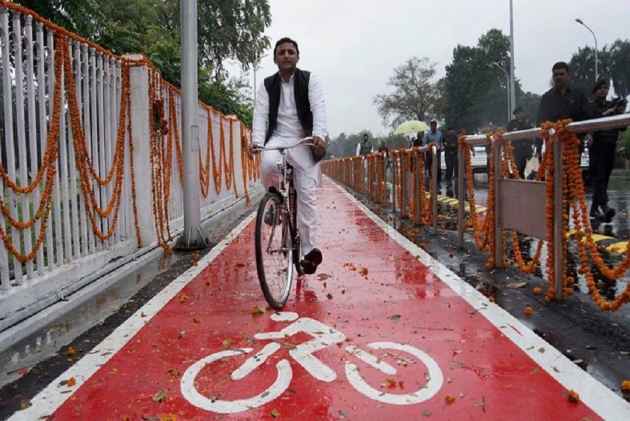 It may soon be the end of the road for the cycle tracks constructed during the previous Akhilesh Yadav regime alongside arterial roads in Uttar Pradesh.

After dropping the word 'Samajwadi' from ambulances and government schemes, the Yogi Adityanath government has now shifted focus to cycle tracks.

"We will demolish cycle tracks in the state which are unused and are causing traffic congestion. The demolition process will begin shortly from Bareilly," Urban Development Minister Suresh Kumar Khanna told PTI today.

Incidentally, 'cycle' is the election symbol of the Samajwadi Party which ruled the state for five years before it was uprooted by the BJP tsunami during the assembly elections which saw the saffron party and its allies storm to power with three-fourth majority in the 403-member House.

The SP's rivals see a subtle political message behind the cycle tracks in the state capital and some other towns in the state.

Moreover, the red and green demarcation pillars along the cycle tracks have drawn criticism from the political opponents of Samajwadi Party which saw in it a camouflaged publicity as the SP flag is red and green.

"Yes, we will be demolishing cycle tracks... Following complaints of locals in Bareilly, I have agreed to get cycle tracks demolished there as they were creating traffic congestion," he said.

On whether any survey for identifying such tracks has been carried out, Khanna said, "We act on public request. Wherever people are facing problems, they are reporting it and after going through their complaint we take decision."

About any such demolition plans in Lucknow, he said the tracks were constructed on Public Works Department (PWD) roads and they will take a decision.

The previous Samajwadi Party government had constructed these cycle tracks in Lucknow, Noida, Bareilly and other towns with a message to conserve the environment and promote use of cycle for better health.

The state urban housing policy had recommended construction of bicycle tracks for "easy, smooth and safe movement of cyclists" in urban areas of the state.

However, in many places they have led to traffic snarls and have been occupied for illegal parking or by vendors.

In Bareilly's Satellite area, a 850-meter cycle track, which is likely to be demolished soon, was constructed at a cost of Rs 6.48 crore but it never served its purpose as it has been illegally occupied by vendors and has become a parking zone for autorickshaws and other vehicles.

In Lucknow and Noida, over 100 km of tracks had been built.

A 35-km stretch costing Rs 31 crore was inaugurated by Akhilesh Yadav in 2015 in the state capital.

Akhilesh Yadav had inaugurated the state's first cycle highway between Etawah and Agra in 2016. The project was 207- km long and incurred a cost of Rs 134 crore.

The chief minister had visited Gomti Riverfront within a few days after assuming charge and had expressed unhappiness over the "excessive cost" incurred on Akhilesh Yadav's dream project while it was yet to be completed.

The Yogi government soon removed the word 'Samajwadi' from ambulance service and various government schemes, including the Samajwadi Pension Yojana.

Since assuming charge on March 19, the Adityanath government has recommended CBI probes into several projects of the previous SP regime.

These include alleged irregularities in the functioning of Shia and Sunni waqf boards, Akhilesh Yadav's dream project of Gomti riverfront development and mobile creche scheme.

Continue FREE with Ads Pay Rs. 1 to Read Without Ads
READ MORE IN:
Yogi Adityanath Akhilesh Yadav National
Next Story : US Carries Out Airstrike Against al-Shabab in Somalia
Download the Outlook ​Magazines App. Six magazines, wherever you go! Play Store and App Store