Use Your Friends, Use Them For Dialogue To Resolve Kashmir Issue, Says Farooq Abdullah 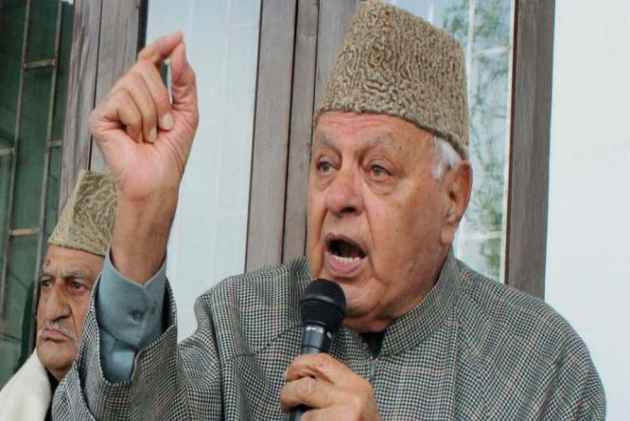 Print
A
A
A
increase text size
Outlook July 21, 2017 17:04 IST Use Your Friends, Use Them For Dialogue To Resolve Kashmir Issue, Says Farooq Abdullah

National Conference leader Farooq Abdullah on Friday suggested third party mediation to resolve the Kashmir issue, saying India should take the help of "friends" and that dialogue was the only solution.

The former chief minister of Jammu and Kashmir also asked, "Till what time should we wait?" and wondered how many more wars will India and Pakistan fight.

"The way out is through dialogue. Use your friends... Use them for dialogue to resolve the issue," he told reporters outside Parliament.

Asked if he meant that a "third party" should be involved, Abdullah said, "(US President) Donald Trump has said he wants to settle the Kashmir problem. We did not ask him for it (help). China has also said it wants to mediate in Kashmir ... We are not saying (that we) hand over things to them."

He stressed that taking help does not mean "we should hand over" the affairs to "friends".

Abdullah referred to the wars that India and Pakistan had fought and said it was time to take "the bull by the horns".

"You haven't spoken for 70 years... Four wars have happened," he said when reminded by a reporter about India's stand that Kashmir was a bilateral issue between India and Pakistan.

"Till what time should we wait? Should we wait for a thousand years? You have to take the bull by the horns. You have to do it sometimes. They (Pakistan) have atom bomb, so have you. How many people will you kill? This is not the way," Abdullah said.

"How many more wars you will fight? How much more will you damage India? The money you spent on buying planes, materials for forces ... If you spend it on poor farmers, India will prosper," he said.

Nikki Haley, the US Ambassador to the UN, had in April said the Trump administration would try and "find its place" in efforts to de-escalate India-Pakistan tensions and not wait till "something happens".

However, Trump himself has not made any public statement on playing the role of a mediator in the Kashmir issue.

China had on July 12 said it was willing to play a "constructive role" in improving India-Pakistan ties, especially after the increased hostility along the Line of Control.(LoC).

India had, however, snubbed China, insisting it was a bilateral matter between it and Pakistan.