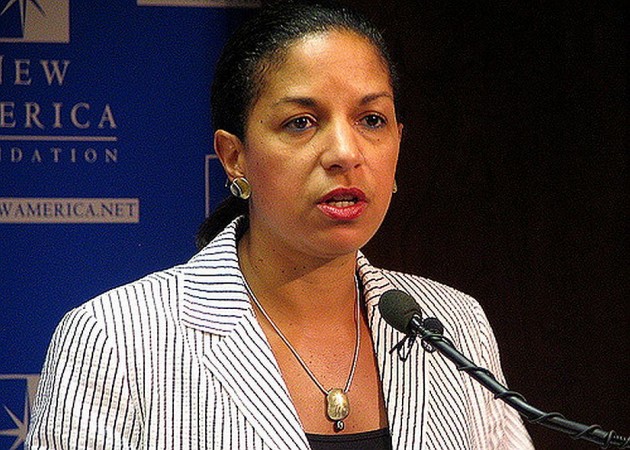 The US is facing more diverse array of threats than ever from a range of sources, outgoing National Security Advisor Susan Rice has said, noting that the Obama Administration built a new relationship with "emerging powers" like India to effectively address these challenges.

"Americans face a more diverse array of threats, from a more diverse range of sources, than ever. This includes everything from state actors such as Russia and North Korea to terrorists like ISIL, often enabled by new technologies," Rice told a Washington audience yesterday.

"It includes transnational threats that can reach our shoresóclimate change, epidemics like Ebola, or the illicit flow of drugs and weapons," she said at a day-long conference 'Passing the Baton' at the US Institute of Peace (USIP), a top American think-tank.

Rice said as a global leader and stakeholder, the US faces the challenge of upholding an international order strained by rising tensions among major global and regional powers and deep governance challenges within them.

"Russia continues to threaten the global order in Ukraine, in Syria, and through its efforts to interfere in democratic elections. China's assertiveness, most notably in the South China Sea, has tested whether the US-China relationship will be defined by our differences or by what we can achieve cooperatively," she said.

"Europeóbuffeted by Brexit, economic uncertainty, refugee and migrant crisis and Russian aggression need American support now more than ever. Against this backdrop, as we've seen in the horrific tragedy in Syria, the Arab world will likely continue to struggle for stability perhaps for a generation or more," she said.

As the US continued its successful fight against terrorism, it also began its Asia-Pacific pivot.

"While managing our complex but increasingly durable relationship with China, we've strengthened cooperation with treaty allies like Japan, South Korea, and Australia; forged deeper partnerships with emerging powers like India and Indonesia; and intensified our support for regional institutions," she said.

"I saw the potential in these new relationships during US President Barack Obama's historic trips to Myanmar, Laos, and Vietnam," she added.

Rice said as a key part of this Asia Pacific rebalance, Obama fought to set rules of the road for trade that ensure fair competition, protect the environment and raise labour standards through the Trans-Pacific Partnership.

"If we don't define these rules of the road, others will. China is already pursuing its own regional trade agreement, with lower standards and fewer protections. Failure to move forward on TPP is eroding American regional leadership and credibility, with China standing to gain strategically and economically," she warned.

The US must protect itself and the international order it has helped build, without subordinating its values or abandoning the alliances, partnerships and cooperation that have yielded unprecedented global prosperity and progress, she said.