US, Russia Clash in Security Council Over Syria Missile Strike 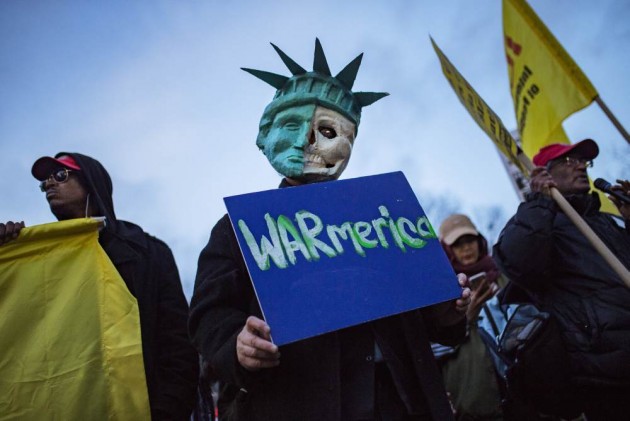 Print
A
A
A
increase text size
Outlook April 08, 2017 10:18 IST US, Russia Clash in Security Council Over Syria Missile Strike

The US and Russia clashed in the UN Security Council over the missile attack on a Syrian airfield, with Washington warning it is "prepared to do more" as Moscow accused it of flagrantly violating international law with its "act of aggression."

The 15-nation Security Council met for an emergency meeting yesterday on the situation in Syria following the launch of 59 Tomahawk cruise missiles by US into the Shayrat Airbase as a response to the Syrian government's use of chemical weapons from the base.

US Ambassador to the UN Nikki Haley, who is President of the Council for this month, said Washington was "fully justified" in carrying out the missile strikes and was prepared to take further action.

"Our military destroyed the airfield from which this week's chemical strike took place. We were fully justified in doing so," Haley said.

"The United States took a very measured step last night. We are prepared to do more, but we hope that will not be necessary. It is time for all civilised nations to stop the horrors that are taking place in Syria and demand a political solution," she said.

Haley said the US will no longer wait for Syrian President Bashar Al Assad to use chemical weapons without any consequences.

"The moral stain of the Assad regime could no longer go unanswered. His crimes against humanity could no longer be met with empty words. It was time to say "enough", but not only say it – it was time to act. Bashar al-Assad must never use chemical weapons again. Ever," she said.

Haley also called out Russia, saying it, along with Iran, bears considerable responsibility for the crisis in Syria since "every time Assad has crossed the line of human decency, Russia has stood beside him."

Russia tore into the US, calling the missile strikes on Syrian territory a "flagrant violation of international law and an act of aggression.

"We strongly condemn the illegitimate actions by the US. The consequences of this for regional and international stability could be extremely serious," Russia's deputy UN ambassador Vladimir Safronkov said.

"These (accusations) are not diplomatic. They are lies. Once again, I warn don't even try to get into fights in the Arab world. Nothing will be achieved. That is why you are getting annoyed. All Arab countries recall your colonial hypocrisy," he said.

Safronkov called on the US to "immediately cease" its aggression and join efforts towards a political settlement in Syria.

Syria's envoy Mounzer Mounzer said the air strike by the US against his country had been a "treacherous, barbaric, flagrant act of aggression" and a grave violation of international law and the UN charter.

"The US attempted to justify its aggression with fabricated arguments that Syria had used chemical weapons in Khan Shaykhun — the same justification advanced by terrorist groups and the countries supporting them," he said.

He asserted that Syria does not have chemical weapons in the first place and would never use such weapons as it condemns the use of such weapons. He said it was well known that terrorists had stockpiled chemical agents in Syria, in cooperation with Turkey, Qatar, Saudi Arabia and other States outside the region.

"This aggression will surely send an erroneous message to the terrorist groups, emboldening them to use more chemical weapons in the future," he warned.

The air strike was a grave extrapolation of the United States strategy to support so-called moderate opposition groups, he said. That country led a purported alliance against ISIL/Daesh, while its real objective was to weaken Syria and its allies, he said.

Citing the American claim that there were weapons of mass destruction in Iraq and its consequent military invasion in the country, Mounzer said the US was once again using fabricated evidence to justify its actions and spread hegemony around the world.

Haley said Russia is supposed to be a guarantor of the removal of chemical weapons from Syria but obviously has failed in that endeavour.

"Or, it could be that the Assad regime is playing the Russians for fools, telling them that there are no chemical weapons, all the while stockpiling them on their bases.

"In the wake of the US air strikes, UN Secretary-General Antonio Guterres said, "Mindful of the risk of escalation, I appeal for restraint to avoid any acts that could deepen the suffering of the Syrian people."

He urged restraint to avoid any escalation of the situation in Syria, after the United States responded militarily to an alleged chemical weapons attack earlier this week.

"These events underscore my belief that there is no other way to solve the conflict than through a political solution," he said, calling on the parties to urgently renew their commitment to making progress in the Geneva (intra-Syrian talks).

Decrying the 'abhorrent' chemical weapons attack, the UN chief stressed the need for accountability for such crimes in line with existing international norms and Security Council resolutions.

UN Under-Secretary-General for Political Affairs Jeffrey Feltman said that the December 2016 Syrian ceasefire – brokered by Russia, Iran and Turkey – had faltered in the last two months amid a steady escalation of military activity.

The Security Council has the primary responsibility for international peace and security, he said, urging the 15-member body to unite and exercise that responsibility to investigate the alleged use of chemical weapons in Khan Shaykhun.

Security Council resolutions and the 2012 Geneva Communique remain the foundation of, and contain the core principles for, United Nations mediation efforts and ultimately a solution in this regard, he said.

Feltman said Iran and Russia condemned the US attack, with the United Kingdom, Australia, Germany, Turkey, Saudi Arabia, Italy, Japan, the Netherlands and New Zealand expressing some support for the US strikes.

A statement from the Syrian General Command of the Army and the Armed Forces called the US response a "blatant act of aggression" which had caused six deaths and huge material damage.