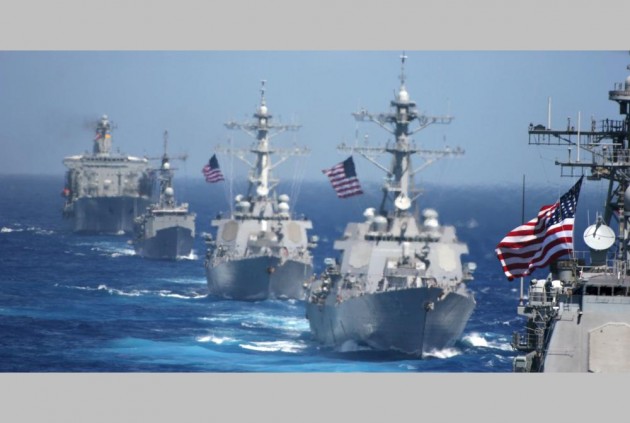 The US Navy has said it had sent a carrier-led strike group to the Korean peninsula in a show of force against North Korea's "reckless" nuclear weapons programme.

The move will raise tensions in the region and comes hard on the heels of a US missile strike on Syria that was widely interpreted as putting Pyongyang on warning over its refusal to abandon its nuclear ambitions.

North Korea denounced Thursday's strike as an act of "intolerable aggression" and one that justified "a million times over" the North's push toward a credible nuclear deterrent.

"US Pacific Command ordered the Carl Vinson Strike Group north as a prudent measure to maintain readiness and presence in the Western Pacific," said Commander Dave Benham, spokesman at US Pacific Command.

"The number one threat in the region continues to be North Korea, due to its reckless, irresponsible and destabilizing program of missile tests and pursuit of a nuclear weapons capability," he told AFP, in an unusually forceful statement.

Originally scheduled to make port calls in Australia, the strike group -- which includes the Nimitz-class aircraft supercarrier USS Carl Vinson -- is now headed from Singapore to the Western Pacific Ocean.

Pyongyang is on a quest to develop a long-range missile capable of hitting the US mainland with a nuclear warhead, and has so far staged five nuclear tests, two of them last year.

Expert satellite imagery analysis suggests it could well be preparing for a sixth, with US intelligence officials warning that Pyongyang could be less than two years away from developing a nuclear warhead that could reach the continental United States.

North Korea on Wednesday fired a medium-range ballistic missile into the Sea of Japan ahead of a US-China summit.

In February the North simultaneously fired four ballistic missiles off its east coast, three of which fell provocatively close to Japan, in what it said was a drill for an attack on US bases in the neighbouring Asian country.

A nuclear-capable SLBM system would take the North's threat to a new level, allowing deployment far beyond the Korean peninsula and a "second-strike" capability in the event of an attack on its army bases.

On Thursday and Friday, US President Donald Trump hosted his Chinese counterpart Xi Jinping for talks during which he pressed Pyongyang's key ally to help curb the North's nuclear weapons programme.