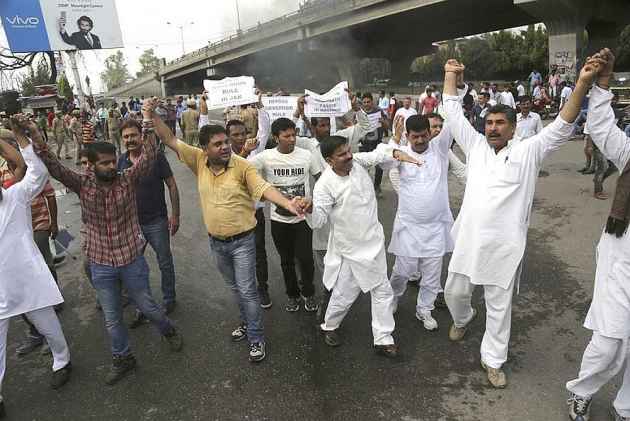 People shout slogans and block road during a protest against the gunfire attack on a bus carrying pilgrims, in Jammu.
AP Photo/Channi Anand

The Trump administration has expressed concern over the "reprehensible" terrorist attack on Amarnath pilgrims in Kashmir that killed seven persons.

Seven Amarnath pilgrims were killed and 19 others were injured in a terrorist attack in south Kashmir's Anantnag district on Monday night.

"We consider it to have been a terrorist attack in the state of Jammu and Kashmir in which seven religious pilgrims were killed. That's of great concern to us," the State Department Spokesperson Heather Nauert told reporters at a news conference.

"These were civilians, they were killed as they were exercising their right to worship and that is, in large part, what makes this so reprehensible. That is a great concern to us and our thoughts and prayers go out to those people and to their families as well. Our prayers are with the victims and those who were affected," she said.

"My thoughts and prayers to all of the Amarnath Yatra terror attack victims and their families. The attack is reprehensible and must be condemned," said Congressman Will Hurd.

Congressman John Ratcliffe in his tweet, sent his prayers to the families of those killed in the "horrific terrorist" attack. Congressman Jim Costa said he is "Deeply saddened at the cowardly attack" on innocent Amarnath Yatra pilgrims. "My thoughts and prayers are with you," he said.

Hindus and pilgrims of every religion should be able to visit their holy places without fear of attacks by terrorists, said Congresswoman Tulsi Gabbard.

"My prayers are with the victims & their families of this senseless, vicious attack on the #AmarnathYatra pilgrims,” tweeted Congresswoman Anna G Eshoo.

In a statement, Overseas Friends of BJP (OFBJP) -USA severely condemned the dastardly attack on the innocent Amarnath pilgrims.

"Indian American community is very sad and shocked to hear this barbaric attack on innocent pilgrims travelling to Amarnath shrine and pray for all victims and their families," said Krishna Reddy Anugula, president of OFBJP-USA.

"Pakistan has been openly harbouring the terrorists of various organizations including LET for the last several decades and there has been a push to declare Pakistan as a Terror sponsoring nation in the US Congress," said its vice president Adapa Prasad.

Chandrakant Patel, immediate past president, said "the Indian Diaspora condemns this cowardly and monstrous attack on the peaceful pilgrims by Pakistan directed terrorists".