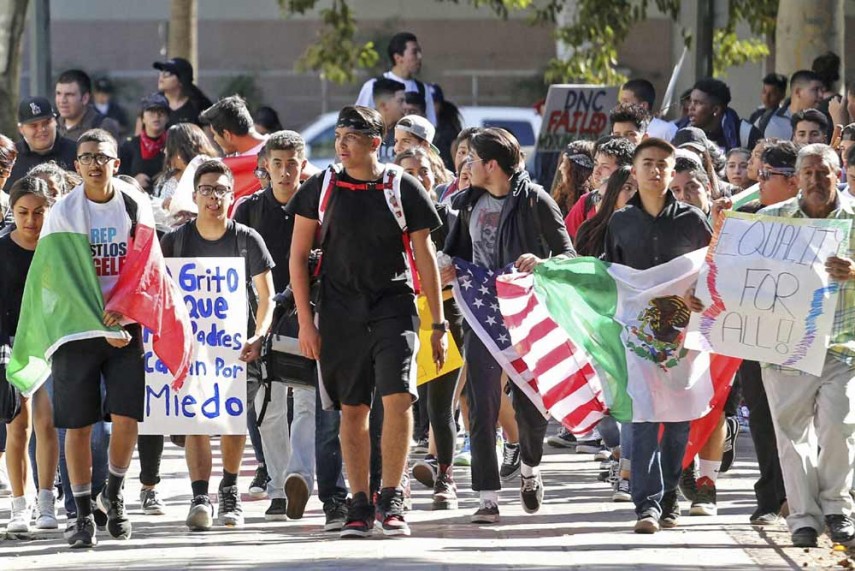 College students at campuses around the United States marched and rallied, urging administrators to protect students and employees against immigration action under a Donald Trump presidency.

Rallying supporters on social media with the hashtag #SanctuaryCampus, organizers said actions were planned at more than 80 schools, including Vermont's Middlebury College, where about 400 people gathered, and Yale University, where demonstrators numbered about 600.

Students sought assurances that their schools would not share their personal information with immigration officials or allow Immigration and Customs Enforcement agents on campus.

"Can you imagine the fear that it would inflict on college campuses if having ICE agents walk into a campus becomes the status quo?" organizer Carlos Rojas of the group Movimiento Cosecha, said by phone from New Jersey. "It would be terrifying."

The actions continued days of demonstrations that have broken out in cities and high school campuses following Trump's election victory last week. The Republican's campaign promises included a vow to deport millions of people who are in the US illegally.

"I'm very fearful," Miriam Zamudio, whose parents brought her to the US from Mexico as a child, said by phone as she prepared to join a protest at Rutgers University in New Jersey.

She worries that the family information she provided on her application for Deferred Action for Childhood Arrivals status will endanger her parents, who are living in the country without legal permission.

An 18-year-old was arrested after he allegedly punched a police officer, police said.

In one non-campus protest on Wednesday night, hundreds of people rallied on the steps of Los Angeles City Hall to protest Trump's appointment of Steve Bannon as a senior adviser.

Faculty and staff at several universities have signed petitions in support of making their campuses sanctuaries for people threatened with deportation or anyone who faces discrimination.