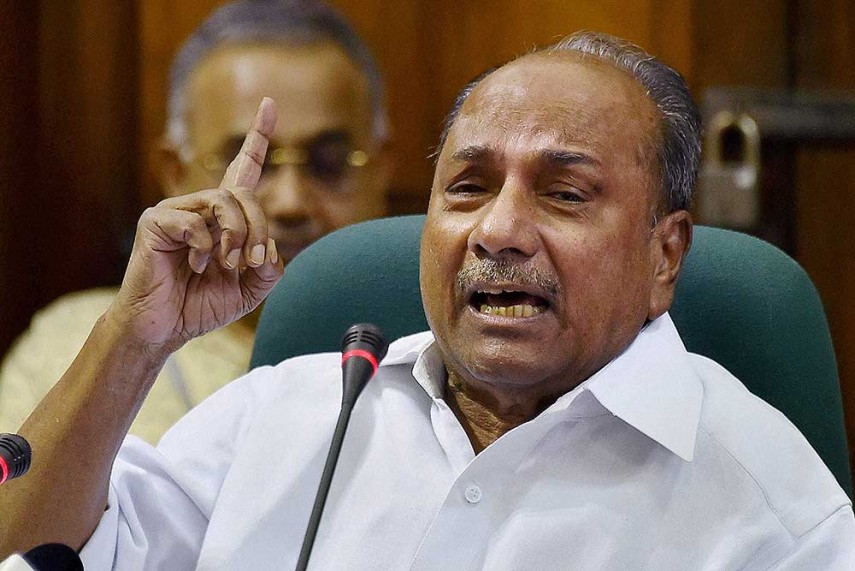 Former Defence Minister A K Antony today said the situation in Kashmir would "explode" and go out of hand if urgent steps were not initiated to find a solution, as he demanded that an all-party delegation be immediately sent to the Valley.

"Situation in Kashmir Valley would explode and would go out of hand if urgent steps were not initiated to find a solution", he said while releasing a book written by a group of journalists from Kerala who visited Kashmir two years ago.

"Kashmir is a volcano now. There is mistrust, fear and anger among the minds of people, especially among youths. The Centre should intervene immediately, otherwise there would be an explosion. Things in Kashmir would become uncontrollable," the Congress leader said.

Urgent steps should be initiated for holding dialogue with all stakeholders in the state to find a political solution in the Valley, Antony said, adding that efforts should be made to win the hearts and trust of the people in Kashmir.

"It is a difficult task, but we have to do that," he said.

"We should regain the trust of youths, that could be achieved only through talks," he said, adding "if conventional paths are not suitable, other ways should be adopted and a human approach should be made."

"Few such attempts were made when UPA was in power. But, it could not move forward," he said.

"Terrorists in the Valley and people of Kashmir should not be treated alike," he added.

Referring to the situation in the Valley, which continues to remain under curfew for the last 45 days, he said this was for the first time in free India that curfew continued for such a long period in Kashmir.

Pakistan military has so far not recognised Kashmir as a part of India and that was the root cause of the problems in the Valley, he said.

"Pakistan government and military have failed to come to terms with the reality that Jammu and Kashmir is part of India... Pakistan has a major role for the present problems," he said.

Asserting that a political solution was the only way to solve the problems, the Congress leader said the Centre should send an all-party delegation to Kashmir immediately.

The book is a collection of articles written by 25 journalists about their experience of their visit to Kashmir.

Antony handed over a copy of the book, published by the State Public Relation Department, to state Co-operation and Tourism Minister A C Moideen.