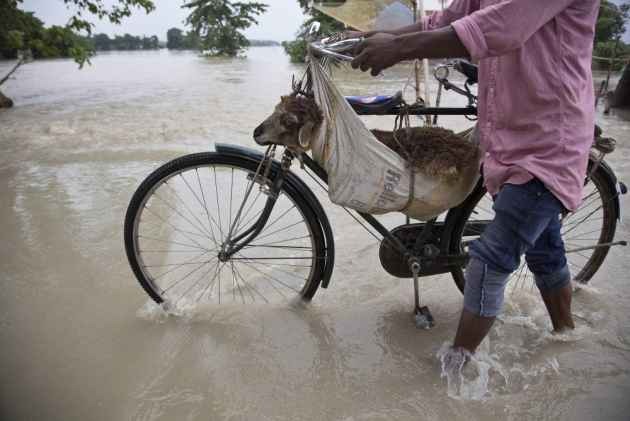 Uttar Pradesh's flood woes continued as the toll rose to 104 with one more death, while over 28 lakh people are affected as raging waters of the rivers emanating from Nepal caused havoc in vast swathes of land.

Citing a report compiled till yesterday, the relief commissioner's office here said around three lakh people have taken shelter in relief camps in the affected districts of eastern parts of the state.

"The death toll in the floods has reached 104 in the state, where 3,097 villages in 24 districts are inundated affecting a population of over 28 lakh," it said.

Army choppers, NDRF and PAC (flood) personnel continued relief and rescue operations round the clock in the severely affected areas of the flood-hit districts of the state.

Release of water in the rivers emanating from Nepal and incessant rains impeded rescue work, they said.

Twenty-eight companies of NDRF, 32 companies of PAC (flood) along with two choppers of the Indian Air Force (IAF) and several Army personnel were working round the clock to save lives and properties in the affected areas.

The Rapti river was also flowing well above the red mark at Rigauli and Birdghat in Gorakhpur, while the Quano river was flowing above danger mark at Chandradeep Ghat in Gonda, it said.

Continue FREE with Ads Pay Rs. 1 to Read Without Ads
READ MORE IN:
Society
Next Story : In A First, Pakistan to Probe Money Laundering Case Against Chinese Firm
Download the Outlook ​Magazines App. Six magazines, wherever you go! Play Store and App Store