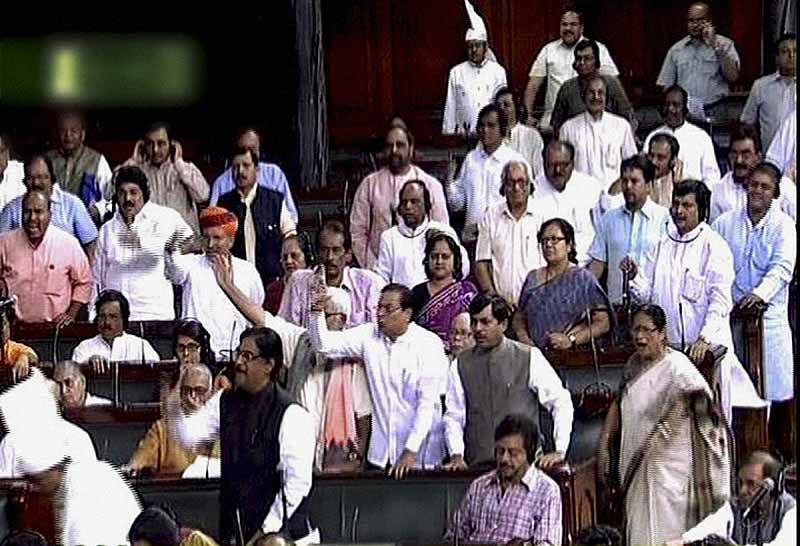 outlookindia.com
-0001-11-30T00:00:00+0553
Uproarious scenes were witnessed in the Lok Sabha today over certain accusations by Opposition against Home Minister P Chidambaram and police firing on farmers in Madhya Pradesh, as a result of which Finance Minister Pranab Mukherjee lost his cool.

He, later, expressed "regret" for losing his temper, saying it was not appropriate on his part.

During the Zero Hour, Uday Pratap Singh (Congress) raised the issue of farmer's problems and police firing on them in Madhya Pradesh.

He said police had treated peacefully agitating farmers in the state as if they were "terrorists".

Alleging that there was "lawlessness" in Madhya Pradesh, Singh demanded dismissal of the BJP-led state government.

Meanwhile, Yashwant Sinha (BJP) raised the issue of alleged role of Chidambaram, the then Finance Minister, in Aircel-Maxis deal in 2006 and claimed that his son Karti had reportedly got five per cent stake in one of the companies.

He referred to a statement issued by the Finance Ministry two days back dismissing allegations against Chidambaram and claimed that it was misleading.

"Prima facie what happened was a big scam and government should not hush it up," Sinha said.

The BJP leader wanted the Finance Minister to make a statement on the "serious" matter, triggering an uproar with Opposition members chanting 'shame, shame'. AIADMK members trooped into the Well.

Agitated at the behavior of the Opposition, Mukherjee, who is also the Leader of the House, noted that it was the Zero Hour and he could not be forced to speak.

At this, Speaker Meira Kumar adjourned the House till 2 pm.

When the House re-assembled, uproar was witnessed again leading to adjournment till 4 pm.

As the House met again, Mukherjee rose to express his "regret" saying he owed an "apology" to the House.

"I tried to intervene in a matter raised by Yashwant Sinha, but unfortunate incident took place...I lost temper. It was not appropriate for me," he said amid thumping of desks by BJP members.