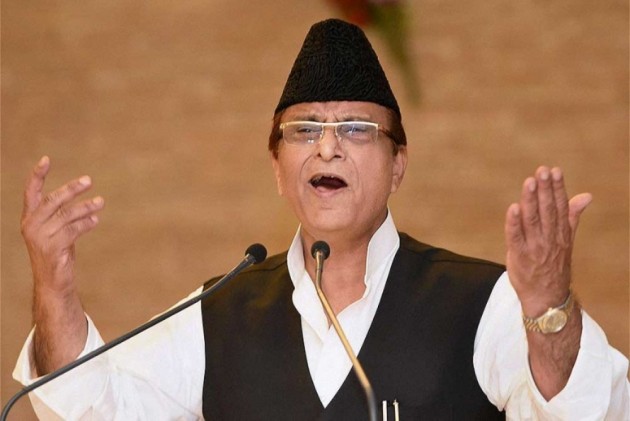 Controversial Uttar Pradesh Minister Azam Khan on Sunday launched a scathing attack on Ram Naik, alleging that the UP governor has "lowered the dignity of Raj Bhawan by entertaining criminals."

"Entry facilitated to those against whom criminal cases have been instituted under different sections of IPC for committing serious offences," he alleged while targeting Naik.

He added, "not only the dignity of the governor's house but democracy too has been ashamed due to Naik's facilitation of criminals and opponents of the Samajwadi Party."

The UP Parliamentary Affairs Minister has been engaged in a war of words with Naik for some time, with the Samajwadi Party leader accusing him of being a "kar sevak" and "communally vitiating" the atmosphere in Uttar Pradesh at the behest of the Modi government at the Centre.

Khan, who launched 'Dial-100' emergency call service at Rampur and Moradabad late last evening, advised the governor, "if he keeps himself so much involved in politics, let him contest the coming elections from Rampur. I am happily prepared to vacate my seat for Ram Naik Ji."

Khan's provocative remarks came after Congress leader Faisal Lala's had blamed the minister for secretly exchanging his black money with valid currency with the help of District Co-operative bank.

Lala is said to be pitched against Khan as a strong contender in the coming assembly elections. Currently, police is searching for Lala on the basis of Azam's complaint that the Congress leader has been falsely implicating him of misbehaving with lady officers of a bank.

Khan entered political arena in 1977 and since then remained victorious in all elections barring two.

He remained extremely close to SP Supremo Mulayam Singh Yadav despite a scuffle with MSY in 2009 over his disagreement with the party boss over growing proximity with Amar Singh and film actress Jaya Prada.

Azam did not eschew his habit to condemn Prime Minister Narendra Modi, alleging, "Badshah (PM) has termed me as traitor earlier but his demonetisation of old currency has sacrificed numerous lives which may be deemed as a tirade against humanity."

He demanded Modi government to grant martyrdom to the people killed in queues while standing for long durations.

Azam further said, "everybody has appreciated demonetisation and under duress or fear, I too used to speak the same language but PM should respond to his alteration in exchange of old notes from Rs 4500 to Rs 2000."

He said, "better it would be if PM brings down the exchange amount further from Rs 2000 to Rs200."