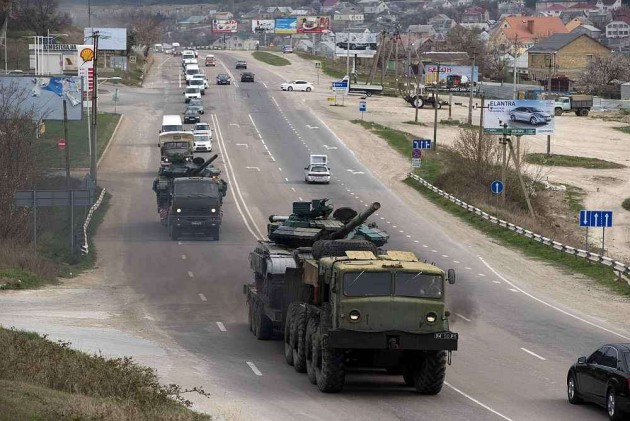 The UN General Assembly today adopted a resolution reaffirming Ukraine's territorial integrity and calling as illegal the referendum that led to Russia's annexation of Crimea in a vote from which India abstained.

The draft resolution, titled 'Territorial integrity of Ukraine' was co-sponsored by Canada, Costa Rica, Germany, Lithuania, Poland, Ukraine and the US.

It was passed in the 193-member General Assembly after 100 nations voted in favour while 11 against. India was among the 58 nations that abstained from voting. India did not make an explanation of vote after the resolution was passed.

The passage of the resolution highlighted the isolation of Russia which has been condemned for its military intervention and takeover of the Ukrainian province of Crimea.

The resolution noted that the referendum held in Crimea and the city of Sevastopol on March 16 was "not authorised" by Ukraine. It affirmed its commitment to the "sovereignty, political independence, unity and territorial integrity of Ukraine within its internationally recognised borders."

The resolution called on all member states to "desist and refrain" from actions aimed at the "partial or total disruption" of the national unity and territorial integrity of Ukraine, including any attempts to "modify" Ukraine’s borders through threat, use of force or other unlawful means.

It called on all states, international organisations and specialised agencies "not to recognise any alteration" of the Crimea's status and that of Sevastopol on the basis of the referendum and to "refrain from any action or dealing that might be interpreted as recognising any such altered status."

It urged all parties to immediately pursue peaceful resolution of the situation in Ukraine through direct political dialogue and to refrain from unilateral actions and inflammatory rhetoric that may increase tensions. It also called on the parties to engage fully with international mediation efforts.

Unlike resolutions passed in the powerful UN Security Council, resolutions in the General Assembly cannot be vetoed but are also not legally binding. They however are a reflection of world opinion.

In her remarks before the vote, US Ambassador to the UN Samantha Power urged the General Assembly members to vote in favour of the resolution since it "enshrines the centrality of territorial integrity and that calls for a diplomatic, not a military solution, to this crisis."

Power said Ukraine deserves full global support in trying to persuade Russia to end its isolation and move from a policy of unilateral confrontation and aggressive acts to diplomatic effort informed by facts, facilitated by dialogue, and based on law.

"Self-determination is a value that all of us here today hail. We do so while recognising the critical, foundational importance of national and international law. Coercion cannot be the means by which a self determines. The chaos that would ensue is not a world that any of us can afford; it is a dangerous world," Power said.

She added that Ukraine is "justified" in asking the international community through the resolution that the "new status quo" that Russia tried to create with its military should not be recognised. 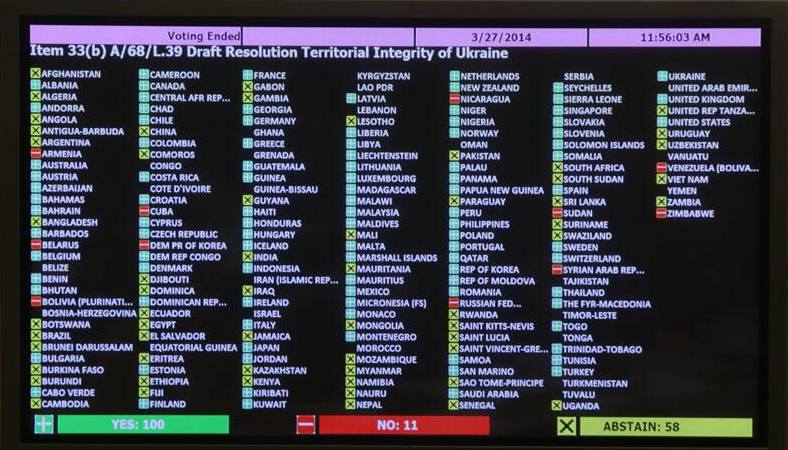