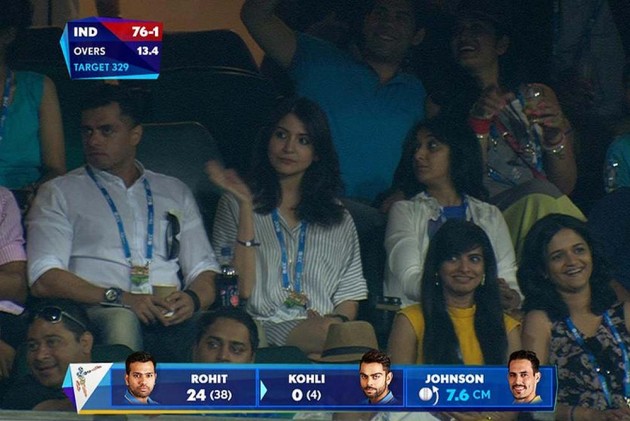 With Virat Kohli getting out after making just 1 run agaist Australia in the World Cup semi finals, Twitter community errupted with jokes and jibes against his girlfriend Anushka Sharma.

The NH10 star was among the spectators to cheer for Kohli and the Indian team and looked disappointed when Kohli returned to pavilion early.

Anushka, 26, became the butt of all jokes and some nasty tweets soon after Virat got out.

"I knew Anushka landing up in Sydney was a bad idea! #AUSvIND #CWC15," a female user wrote.

"Worst mistake Anushka Sharma made in her life was to be in Sydney for the Semi's! Ab poora desh nahi maaf karne waala! ??" another offered.

"Feeling sorry for Anushka. Her boyfriend let her down big time! ??"

"What did Anushka Sharma tell Virat Kohli before he went out to bat today? 'Virat, I want you here in 5 minutes.' :D #CWC15 #AUSvsIND," a user joked while another wrote, "True Love = Anushka Sharma traveling to Sydney to see Virat Kohli score 1 run. #CWC15."

But there were some sane voices too who countered the trolls for blaming the actress for Kohli's performance.

"So what if #AnushkaSharma is in Sydney to watch the match. @imVkohli's performance is to be blamed. Not #Luck, you idiots. #IndvsAus," wrote a user.