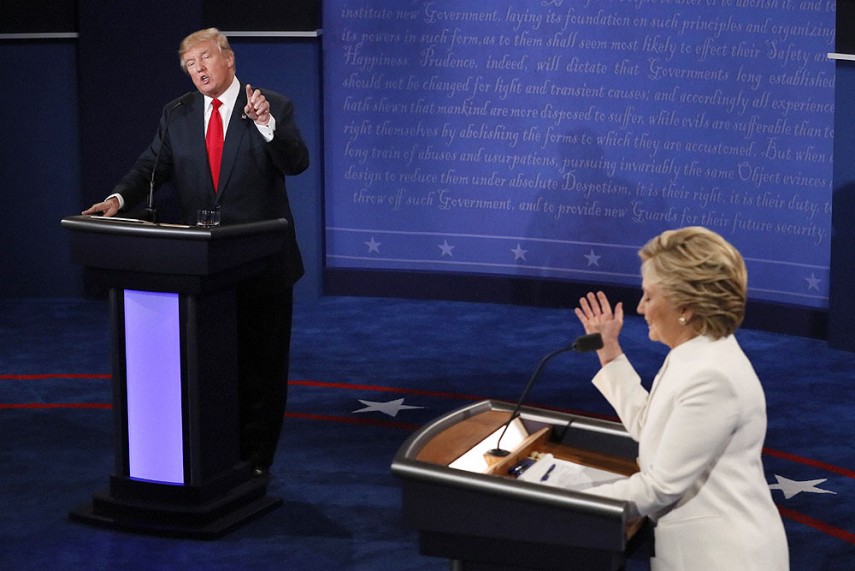 US President Donald Trump has thanked his defeated Democratic rival Hillary Clinton and former president Bill Clinton for attending his inauguration saying he was "honoured" by their presence, and urged the attendees to give them a standing ovation.

At a Congressional luncheon held in his honour at the US Capitol soon after his inauguration, Trump said he was honoured by their presence.

"I'll tell you, there is something that I wanted to say because I was very honoured, very, very honoured when I heard that President Bill Clinton and Secretary Hillary Clinton were coming today and I think it's appropriate to say and I'd like you to stand up," Trump said.

In fact when Trump entered the room, he went out of his way to walk across the room to shake hands with Hillary, and said to her loudly, "Thank you for being here."

Clinton was among the more popular guests as people lined up to talk with her and in some cases get photos.

"And honestly, there's nothing more I can say because I have a lot of respect for those two people," Trump said.

"So thank you for being here and we're going to have four great years hopefully of peace and prosperity and we'll be working very, very hard," he added.

The 69-year-old former senator and secretary of state was defeated by Trump in November 8 elections.

Earlier during the luncheon, 70-year-old Trump and First Lady Melania Trump were presented with gifts from the Congress.

For the 8th consecutive Inauguration, Lenox Corporation created the official Inaugural gifts from the American people, given to the new President and Vice President of the US.

The Presidential crystal bowl shows an image of the White House on one side overlooking the Jefferson Memorial on the opposite side.

The Vice Presidential crystal bowl depicts the US Capitol building overlooking the Lincoln Memorial on the other side.

Each bowl has a compass rose cut into the base with the points of the compass aligned correctly with the buildings etched into the crystal.

The bowls are made of lead crystal and are 12 inches across, and will be placed on top of black cherry wood bases that bear an inscription of the date and occasion engraved into silver plaques.

Presenting the gift to the First Lady, Senator Roy Blunt said the glass for it came from Slovenia.  "The other unique thing for the first lady and her parents that would never have been such an important thing before; the glass came from Slovenia," he said amidst applause.

Blunt is Chairman of the Joint Congressional Committee on Inaugural Ceremonies.

"The designer thought that the blest glass in the world for this particular design, which he began to work on last summer was glass from Slovenia, maybe he knew something that none of us quite knew for sure at that time," he said amidst laughter.

In his remarks, Senate Majority Leader Mitch McConnell said the new President has surmounted formidable challenge getting to this moment.

"He has been underestimated often. But he never let it stop him from succeeding," he said.

"We are wishing him similar success as he turns to the charge of governing. We face many challenges, but we've been challenged before and emerged stronger. We live in changing times, yes, but some things endure and we celebrate one of them today," McConnell said.

"This inauguration is a reminder of our common story as Americans, and on this most uniquely American of occasions, I ask you to stand and join me in raising a glass. Mr President, may you find every success in the years ahead, may you unite our country behind a common vision," he said.

"We come to this sacred inauguration day united and respect for our Democracy and determined to make a difference in the lives of hardworking Americans," said Nancy Pelosi, Democratic Leader in the US House of Representatives.

She presented one of the flags that flew above the Capitol today to Pence.

The Joint Congressional Committee on Inaugural Ceremonies has been hosting this traditional lunch at least since 1953 with President Eisenhower.

"In 1981, President Reagan's first inauguration, the lunch took its current form and moved to this grand hall, the National Statuary Hall, which served until 1857 as the chamber of the House of Representatives," Blunt said.

Another recent addition is that of Norman Borlaug, the leader of Indian Green Revolution.

Former presidents Jimmy Carter and Bill Clinton and Bush did not attend.

On the menu were Maine Lobster and Gulf Shrimp in Saffron Sauce and Peanut Crumble; Angus Beef with Dark Chocolate and Juniper Jus and Potato Gratin, followed by Chocolate Soufflé Cherry Vanilla.

Trump and Pence were both presented with an American flag that flew above the Capitol as they was sworn in, and a photo of the event.