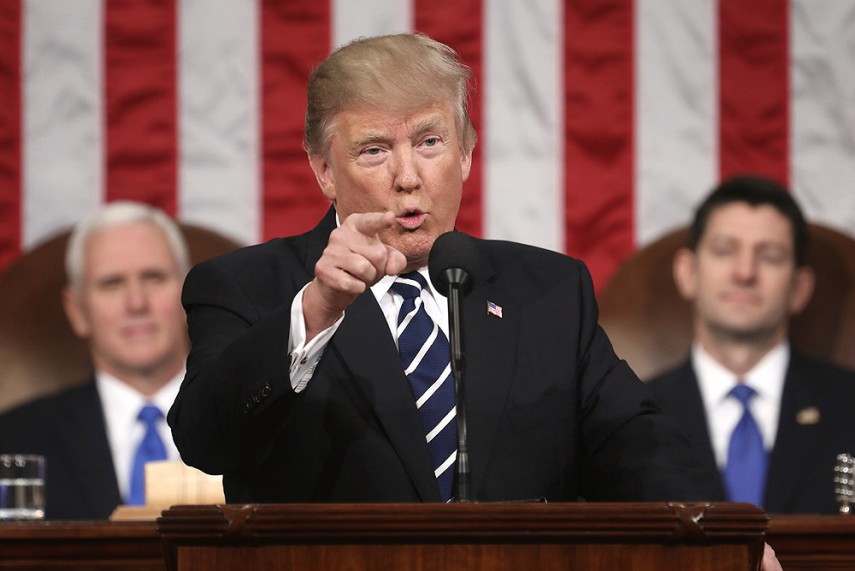 President Donald Trump today said he would not allow America to become a sanctuary for extremists and vowed to work with allies, including friends in the Muslim world, to destroy the Islamic State militant group.

Trump, during his first address to Congress, said it was his obligation is to serve, protect and defend American citizens.

"As promised, I directed the Department of Defence to develop a plan to demolish and destroy ISIS -- a network of lawless savages that have slaughtered Muslims and Christians, and men, women and children of all faiths and beliefs," Trump said.

"We will work with our allies, including our friends and allies in the Muslim world, to extinguish this vile enemy from our planet," he said.

"We cannot allow a beachhead of terrorism to form inside America -- we cannot allow our nation to become a sanctuary for extremists," he said as he defended his tough immigration policies.

He said his administration has been working on improved vetting procedures will shortly take new steps to keep the country safe and "to keep out those who would do us harm".

"We are also taking strong measures to protect our nation from radical Islamic terrorism," he said.

According to data provided by the Department of Justice, the vast majority of individuals convicted for terrorism- related offenses since 9/11 came here from outside of the US.

"It is not compassionate, but reckless, to allow uncontrolled entry from places where proper vetting cannot occur. Those given the high honour of admission to the United States should support this country and love its people and its values," Trump said.

He told the countrymen that his foreign policy calls for a direct robust and meaningful engagement with the world.

"We want harmony and stability, not war and conflict. We want peace, wherever peace can be found," Trump said.

"America is friends today with former enemies. Some of our closest allies, decades ago, fought on the opposite side of these World Wars. This history should give us all faith in the possibilities for a better world," he said. "To those allies who wonder what kind of friend America

will be, look no further than the heroes who wear our uniform. Our foreign policy calls for a direct, robust and meaningful engagement with the world. It is American leadership based on vital security interests that we share with our allies across the globe," Trump said.

Trump said his administration strongly supports NATO, an alliance forged through the bonds of two World Wars that dethroned fascism and a Cold War that defeated communism.

"But our partners must meet their financial obligations. And now, based on our very strong and frank discussions, they are beginning to do just that," he said.

"We will respect historic institutions, but we will also respect the sovereign rights of nations," he asserted.

"Free nations are the best vehicle for expressing the will of the people –- and America respects the right of all nations to chart their own path. My job is not to represent the world. My job is to represent the United States of America. But we know that America is better off, when there is less conflict -- not more," he said.

The US President said he has also imposed new sanctions on entities and individuals who support Iran's ballistic missile programme.

He also reaffirmed America's unbreakable alliance with the State of Israel.