Trump Starts Saudi Tour As Scandals Mount in US 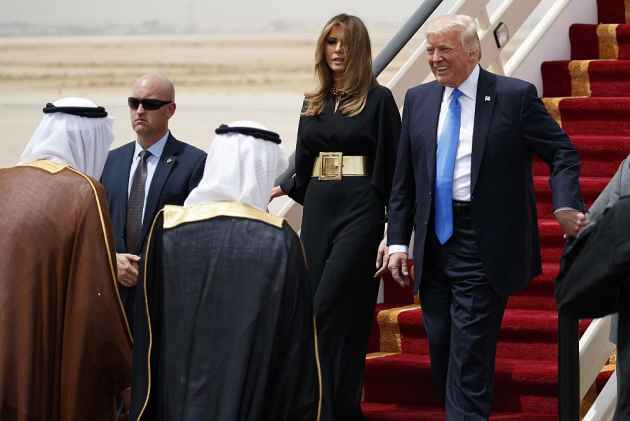 US President Donald Trump launched an eight-day foreign tour in Saudi Arabia today, taking his first steps on the world stage as scandals mount at home.

Trump can expect a warm welcome in the oil-rich kingdom where he is to hold talks with Saudi King Salman and other senior royals -- a mood in sharp contrast to Washington where pressure is building after fresh claims over his team's alleged links to Moscow.

Air Force One had barely taken off when it was announced that James Comey, the former FBI chief fired by Trump, had agreed to testify publicly about Russian interference in the US elections.

Reports also emerged that Trump had called Comey "a nut job" and that the FBI had identified a senior White House official as a "significant person of interest" in its probe of Russian meddling.

A red carpet was rolled out and staircase rolled up to Air Force One after it landed at King Khalid International Airport in Riyadh shortly before 10:00 am local time.

Trump and his wife Melania, who dressed conservatively in black but did not cover her hair, walked side-by-side to the tarmac where they both shook hands with King Salman.

Trump's daughter and presidential adviser Ivanka Trump and Trump's son-in-law and senior advisor Jared Kushner exited from the rear of the plane, holding hands as they walked across the tarmac.

The 81-year-old king, walking with a cane, led the president and first lady into an airport reception room, where they chatted over coffee.

Trump is to hold formal talks with the Saudi leader and the kingdom's two powerful crown princes later on Saturday, before giving a speech on Islam to leaders of Muslim countries on Sunday.

For Riyadh the visit is an opportunity to rebuild ties with a key ally, strained under Trump's predecessor Barack Obama who Sunni Arab Gulf states suspected of a tilt towards their Shiite regional rival Iran.

That, together with a more muted focus on human rights and the likely announcement of new arms deals, should please Washington's traditional Sunni Gulf allies, analysts say.

Sunday's speech to dozens of Muslim leaders has been touted as a major event -- along the lines of a landmark address to the Islamic world given by Obama in Cairo in 2009.

The speech will be especially sensitive given tensions sparked by the Trump administration's attempted travel ban targeting several Muslim majority nations and accusations of anti-Islamic rhetoric on the campaign trail.

"I'll speak with Muslim leaders and challenge them to fight hatred and extremism, and embrace a peaceful future for their faith," Trump said ahead of his visit.

Trump wants Gulf states in particular to do more to tackle extremists such as the Islamic State jihadist group.

Before departing, the president tweeted he would be "strongly protecting American interests" on his marathon trip.

While most US presidents make their first foreign trip to neighbouring Canada or Mexico, 70-year-old Trump has opted instead for the Middle East and Europe.

He travels to Israel and the Palestinian Territories on Monday and Tuesday, and then to the Vatican and to Brussels and Italy for NATO and G7 meetings.

The tour has been billed as a chance to visit places sacred to the three major monotheistic religions -- Islam, Judaism and Christianity.

But it is also fraught with peril for the real estate magnate, who is known to dislike lengthy travel.

The avalanche of revelations in the run-up to his departure has eroded Trump's standing at home -- where the parallels with Richard Nixon's ill-fated presidency are now being openly drawn.

A report by The Washington Post yesterday said that the probe into his campaign's Russia ties had identified a "significant person of interest" in the White House undercut Trump's insistence his election bid had nothing to do with the Kremlin.

The White House was rocked by another bombshell when reports emerged that Trump said his firing of "nut job" Comey had relieved "great pressure" on him due to the investigation.

The scandals have revived questions about his ability to strike a presidential tone with his foreign counterparts, with Trump declaring himself the victim of the "greatest witch hunt" in American political history.

The first leg of the trip is likely to be the easiest -- Saudi leaders welcomed Trump's election and are keen to work with an administration they see as more in line with their goals.

The normally austere kingdom has put on a major display for the visit, with the streets of Riyadh lined with US and Saudi flags and billboards featuring Trump and King Salman.

The expected announcement of an arms deal worth more than $100 billion -- potentially one of the biggest in US history -- would also be good news for both Trump and the Saudis.

The next leg in Israel and the Palestinians Territories could be more complicated, despite the history of warm ties between Trump and Prime Minister Benjamin Netanyahu.

The visit is already awash in controversy, from a row over Trump's planned visit to Jerusalem's Western Wall, the holiest prayer site for Jews, to his alleged disclosure of Israeli intelligence to Russian officials.

After meeting Netanyahu in Jerusalem, Trump will see Palestinian president Mahmud Abbas in Bethlehem, part of his efforts to revive the long-stagnant Middle East peace process.

On Tuesday Trump heads to Rome to meet with Pope Francis. The two men are at odds on everything from climate change to refugee policy, although the pontiff says he will give America's bullish leader an open-minded hearing.

The president will then meet members of NATO in Brussels and attend a G7 summit in the picturesque Sicilian town of Taormina overlooking the Mediterranean.

These meetings -- including with new French President Emmanuel Macron -- will be closely watched for signs of whether Trump and traditional US allies in Europe can work together.