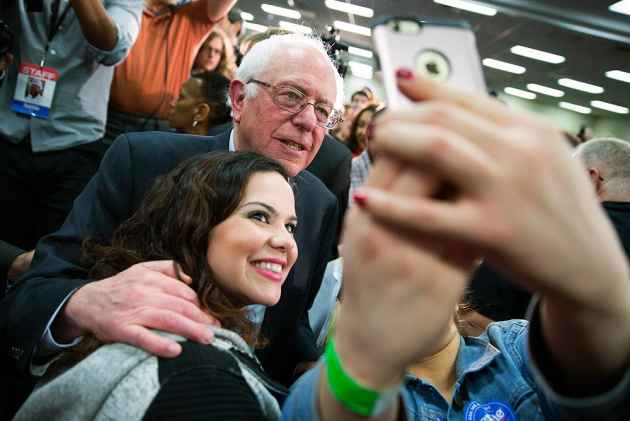 Hillary Clinton was today handed out a shocking defeat by her Democratic rival Bernie Sanders in the New Hampshire primary while controversial Donald Trump solidified his frontrunner status in the Republican party by registering a thumping victory in the race to the White House.

Vermont Senator Sanders, 74, won the New Hampshire contest after Clinton conceded defeat. Sanders received 60 per cent of the votes as against 38 per cent by 68-year-old former secretary of state.

Trump, 69, whose blunt language targeting women, Mexicans and Muslims electrified many Republicans and horrified others, defeated his nearest rival John Kasich, Governor of Ohio, by a huge margin of more than 50,000 votes.

He benefited from an unusually large field of candidates that split the vote among Kasich and former Governor Jeb Bush of Florida.

Trump, a reality TV star who has never run for office, and Sanders, a self-declared democratic socialist, were seen as long-shot outsiders when they launched their campaigns.

Both candidates are riding on a wave of discontent with mainstream politics.

"Their victories reflect deep bipartisan discontent at professional politicians and suggest that both the Democratic and Republican races will now be long struggles that could stretch well into the spring," CNN commented.

New Hampshire delivered a painful personal blow to Clinton, who squeezed out the narrowest of victories in Iowa last week. New Hampshire is the state that made her husband Bill Clinton the "comeback kid" in 1992. She had won in New Hampshire eight years ago against US President Barack Obama.

Sanders described his win as "political revolution" while Clinton said that she is not giving up.

Clinton acknowledged that when she started her campaign last spring she knew that it is not going to be easy.

Trump appeared on stage with a beaming smile on his face and gave a thumbs-up to his crowd of supporters.

"We are going to make America great again," Trump said in his victory speech which he began by thanking his late parents, late elder brother and other family members.

Trump who is leading in all the national polls with impressive margin had received a stunning defeat at the hands of Cruz, the Senator from Texas, at the Iowa Caucus last week.

The race to White House now moves to South Carolina, where Indian-American Nikki Haley is one of the most popular Governor of the State in recent decades.

"He (Sanders) wants to give away the country folks, we are not going to let this happen," Trump told a cheering audience as he criticised the top Democratic winner in New Hampshire.

Continuing with his anti-China rhetoric, Trump said if elected as the US president in the November elections, he would bring back the jobs from China, Japan and Mexico – the countries which are taking away the jobs of the Americans.

"We have to make the deal for the American people," he said.

Trump vowed to make the American military "so powerful" that no can "mess with us", and asserted that the US under him would have strong borders.

People would be welcomed legally and not legally, he said vowing to build the wall along the Mexico border to prevent illegal immigrants from entering the country.

Describing Obama care as total disaster, Trump said that he would repeal and replace this signature health care of the US President.

"I am going to be the greatest jobs president that God ever created," he said and urged his countrymen not to believe in the "phony numbers" of unemployment rate of less than five per cent.

"We are going to knock down ISIS," Trump said.

Addressing his enthusiastic supporters at a school gymnasium in Concord in New Hampshire, Sanders said the people have sent a message that the government in the country belongs to all of the people and not just a handful of wealthy campaign contributors.

The New Hampshire primary results came eight days after caucuses in Iowa, where Sanders fought Clinton to a virtual tie.

"Nine months ago, we began our campaign here in the Granite State," Sanders said.

"We had no campaign organisation and we had no money. And we were taking on the most powerful political organisation in the United States of America, a team that defeated Barack Obama here in the Democratic primary in 2008," he added.

"And tonight, through a record-breaking voter turnout, we won because we harnessed the energy and the excitement that the Democratic Party will need to succeed in November," Sanders said.