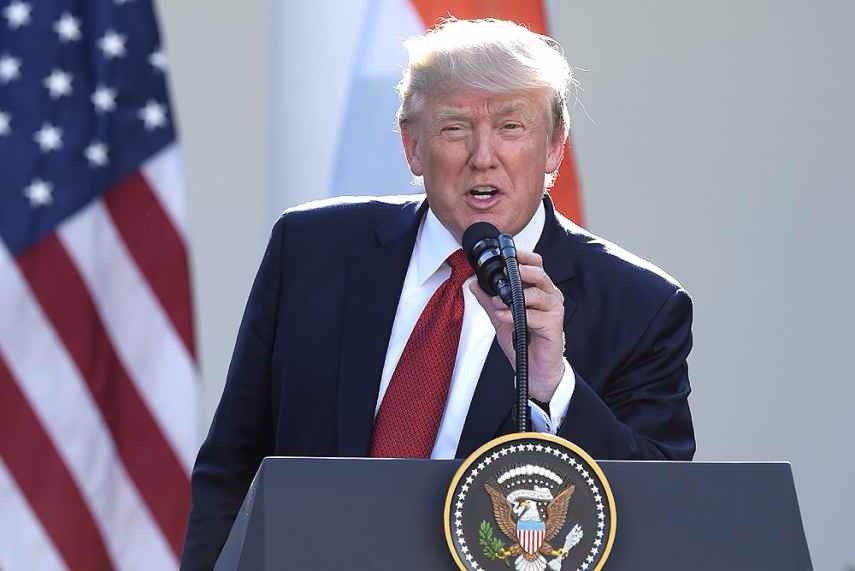 The US President Donald Trump today announced his support for a legislation that would cut in half the number legal immigrants allowed into the US while moving to a "merit-based" system favouring English-speaking skilled workers for residency cards.

If passed by the Congress and signed into law, the legislation titled the Reforming American Immigration for Strong Employment (RAISE) Act could benefit highly-educated and technology professionals from countries like India.

The RAISE Act would scrap the current lottery system to get into the US and instead institute a points-based system for earning a green card. Factors that would be taken into account include English language skills, education, high- paying job offers and age.

"The RAISE Act will reduce poverty, increase wages, and save taxpayers billions and billions of dollars. It will do this by changing the way the US issues Green Cards to nationals from other countries. Green Cards provide permanent residency, work authorisation, and fast track to citizenship,” Trump said at a White House event to announce his support to the RAISE Act.

Standing along with two top authors of the bill -- Senators Tom Cotton and David Perdue – Trump said the RAISE Act ends chain migration, and replaces the low-skilled system with a new points-based system for receiving a Green Card.

This competitive application process will favour applicants who can speak English, financially support themselves and their families, and demonstrate skills that will contribute to our economy, he said, adding that the RAISE Act prevents new migrants and new immigrants from collecting welfare, and protects US workers from being displaced.

"That's a very big thing. They're not going to come in and just immediately go and collect welfare. That doesn’t happen under the RAISE Act. They can't do that. Crucially, the Green Card reforms in the RAISE Act will give American workers a pay raise by reducing unskilled immigration,” he said.

Trump said this legislation will not only restore America's competitive edge in the 21st century, but it will restore the sacred bonds of trust between America and its citizens.

"This legislation demonstrates our compassion for struggling American families who deserve an immigration system that puts their needs first and that puts America first," he said.

Noting that the current over a half-century old system is "an obsolete disaster", Senator Cotton said that it is time for it to change.

"First, we bring over a million immigrants into this country a year. That's like adding the population of Montana every single year; adding the population of Arkansas every three years. The vast majority of those workers -- or those immigrants come here not because of their English-language abilities or their job skills, or their job offer, or their educational attainment," he said.

In fact, only one in 15 out of a million new immigrants come here because of their job skills and their ability to succeed in this economy, Cotton said.

The RAISE Act will be re-orienting Green Card system towards people who can speak English, who have high degrees of educational attainment, who have a job offer that pays more, and a typical job in their local economy, who are going to create a new business, and who are outstanding in their field around the world, he added.

Senator Perdue said the current system does not work. "It keeps America from being competitive, and it does not meet the needs of the economy today," he said.

"Today we bring in 1.1 million legal immigrants a year. Over 50 per cent of our households of legal immigrants today participate in our social welfare system. Right now, only one 1 out of 15 immigrants who come into our country come in with skills that are employable. We've got to change that," he said.

Perdue said he looked at the at best practices. "We looked at countries like Canada, Australia, and others. What we're introducing today is modeled on the current Canadian and Australian systems. It's pro-worker, it's pro-growth, and it's been proven to work. Both have been extremely successful in attracting highly skilled workers to those countries,” the Senator said.

"We can all agree that the goals of our nation's immigration system should be to protect the interests of working Americans, including immigrants, and to welcome talented individuals who come here legally and want to work and make a better life for themselves. Our current system makes it virtually impossible for them to do that," said the Senator.

According to Attorney General Jeff Sessions, the higher entry standards established in this proposal will allow authorities to do a more thorough job reviewing applicants for entry, therefore protecting the security of the US homeland.

"The bill would end programme known to be rife with fraud and abuse and finally improve the vetting process, making our country and working class wages much safer and stronger," said the Attorney General.