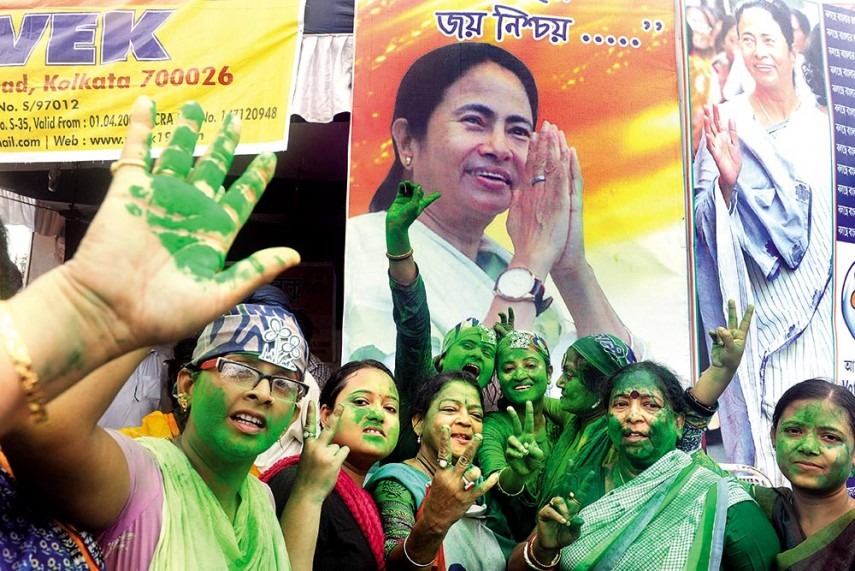 The Trinamool Congress swept today the municipal polls in West Bengal capturing all the seven civic bodies while the BJP finished second in most places relegating the Left to the third position.

The BJP won six seats in three municipalities which included four in Dhupguri in north Bengal and one each in Buniyadpur (north Bengal) and Panskura in south Bengal, according to the results of the August 13 civic elections.

The TMC bagged also seats in Panskura and Haldia in East Midnapore district, Nalhati in Birbhum, Buniyadpur in South Dinajpur and Dhupguri in Jalpaiguri districts.

The party also registered a massive victory in Durgapur Municipal Corporation in Burdwan West district capturing all the 43 wards, besides Cooper's Camp where it won all the 12 seats.

In Haldia municipality also, the TMC got elected in all the 29 seats, according to the results declared today.

The election results were indicative of a paradigm shift in the state politics with the BJP emerging as the main challenger to the TMC, according to poll watchers.

The Left put up a poor show with the Forward Bloc, a front partner, winning a seat in Nalhati municipality.

The Congress failed to win even a single seat in the polls.

In Haldia municipality, once considered as a Left bastion, the TMC won all the 29 wards securing more than 50 per cent of the total votes polled.

Of the 16 seats in Dhupguri municipality in north Bengal, the TMC won 12 seats while the BJP captured four.

Out of the 14 wards in Buniyadpur, also in north Bengal, the TMC won 13 wards and the BJP bagged one seat.

In Nalhati municipality, the TMC won 14 of the 16 wards, while the Left Front and an independent candidate won one ward each.

In 18-member Panskura municipality, the TMC won 17 wards and the BJP managed to secure one ward.

The TMC also won the by-election in a ward in Jhargram municipality.

"The results are a reflection of people's faith in the TMC government and a befitting reply to the canards spread against us," TMC secretary general Partha Chatterjee said, reacting to the outcome of the civic polls.

On the BJP's performance, senior TMC leader Gautam Deb said, "The Left Front has shifted its vote to the BJP. The vote share of the TMC is intact, rather we have increased our vote share. I

"It is the Left which is having a tacit understanding with the BJP," he said.

State BJP president Dilip Ghosh, however, said, "We all know that the TMC used money and muscle power to win the elections. We have seen how democracy was subverted by the TMC.

"In spite of a reign of terror, we have managed to win seats and come up to the second position," he said.

The opposition called the civic election results a "farce", with the Congress and the Left stressing that it was "not a real reflection" of the people's mandate.

"What is the use of conducting elections in Bengal? The TMC doesn't allow free and fair elections. If an opposition candidate manages to win, they poach on him," he said.

"We feel these results are not the reflection of people's mandate. After the elections were held, we had demanded cancellation of the entire elections as it was not free and fair," senior CPI(M) leader Sujan Chakraborty said.