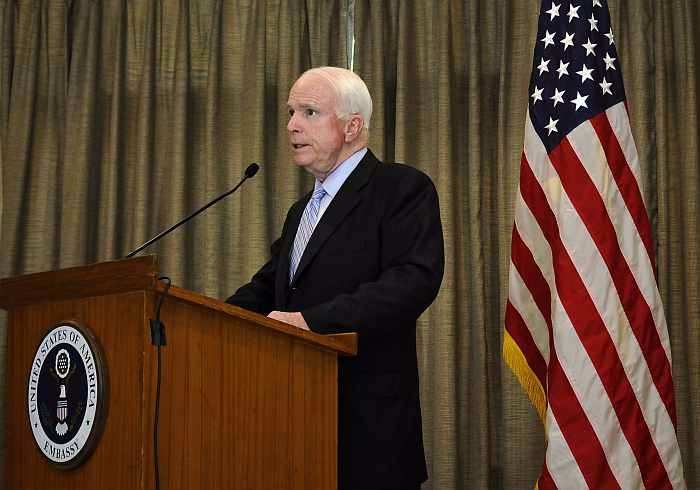 Top Republican Senator John McCain, who is the chairman of the powerful Senate Armed Services Committee, has been diagnosed with brain cancer, Mayo Clinic hospital has said.

The tumour was diagnosed after McCain, who was the Republican presidential candidate in 2008 elections, underwent a procedure to remove a blood clot from his left eye.

According to the Mayo Clinic Hospital in Phoenix, McCain underwent a procedure to remove a blood clot from above his left eye at the hospital on July 14.

Subsequent tissue pathology revealed that a primary brain tumour known as a glioblastoma was associated with the blood clot, the hospital said in a statement yesterday.

Scanning done since the procedure (a minimally invasive craniotomy with an eyebrow incision) shows that the tissue of concern was completely resected by imaging criteria, it said.

"The Senator and his family are reviewing further treatment options with his Mayo Clinic care team. Treatment options may include a combination of chemotherapy and radiation. The Senator's doctors say he is recovering from his surgery 'amazingly well' and his underlying health is excellent.", the hospital said in a statement.

In a statement issued by his office, McCain appreciated the outpouring of support he has received over the last few days.

"He is in good spirits as he continues to recover at home with his family in Arizona. He is grateful to the doctors and staff at Mayo Clinic for their outstanding care, and is confident that any future treatment will be effective. Further consultations with Senator McCain's Mayo Clinic care team will indicate when he will return to the United States Senate," the office said.

McCain, who was re-elected to his sixth term in the Senate in 2016, served as an aviator in the US navy before entering politics. He was held as prisoner of war for five and a half years during the Vietnam war.