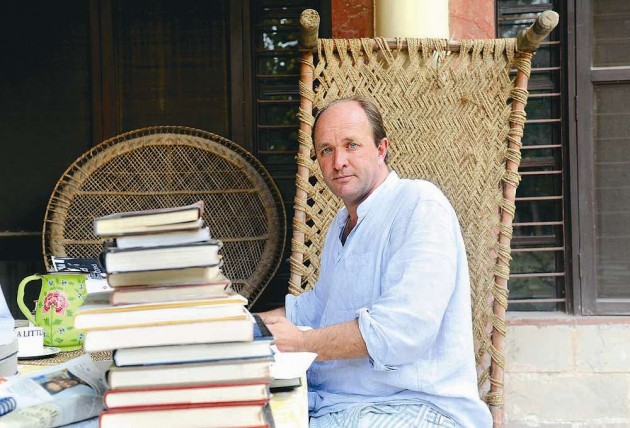 Among the exclusively non-fiction works which celebrated author Dan Brown, who came to India in November, read was theoretical physicist and renowned futurist Michio Kaku's latest book The Future of the Mind.

The top three picks of Pakistani writer Bilal Tanweer, whose debut novel The Scatter Here is Too Great published earlier this year by Random House were Rebecca Solnit's Wanderlust: A History of Walking; Mumbai Fables by Gyan Prakash and Laurent Gayer's Karachi: Ordered Disorder and the Struggle for the City.

Noted writer William Dalrymple read widely for his new book The Anarchy on the rise of the East India Company, and was fascinated by the work of his predecessors in the field especially that of John Keay, Nick Robins, Thirtankar Roy, Sanjay Subrahmanyam, Philip Lawson, Percival Spear, Christopher Bayly and K N Chaudhuri.

"Two of my favourite books this year outside that field were set close to home, both of them stylishly written, powerfully moving books set against the bleak beauty and baroque decay of 21st century Delhi. Deepti Kapoor's A Bad Character is in many ways the fictional counterpart of Rana Dasgupta's brilliant non-fiction portrait of Delhi, Capital. Both books darkly distil the essence of a corrupt, violent and traumatised city which growing so fast it is almost unrecognisable to its own inhabitants," Dalrymple told PTI.

But the book which, he says, "swept him away" was something well off his usual territory, a history of the ancient Mediterranean – The Making of the Middle Sea by Cyprian Broodbank.

"It's a wonderfully sweeping and oddly unputdownable history of the region from the ice age to the Parthenon and full of the oddest facts imaginable," he says.

Novelist Amit Chaudhuri, who is also an acclaimed musician and a professor of Contemporary Literature at the University of East Anglia, named four books as his top reads in 2014.

"Prawin Adhikari's The Vanishing Act is a book of stories by a young Nepalese writer who was a discovery to me. His language is compelling in the way it captures small dissonances in emotion and the immediacy of sensory experience. The Scatter Here is Too Great is a terrific, deeply impressive book of linked stories about Karachi, full of contained volatility, savage humour, and love," he says.

"Dubravka Ugresic, by her own definition a 'post-Croatian' writer, is our present-day Kafka. In her excellent new book of essays, Europe in Sepia, she invokes the comedy and melancholy of being a writer in a world without ideology or ideals. This year, I also read for the first time Anne Carson's extraordinary early poem-sequences, like The Glass Essay and The Fall of Rome, in the collection Glass and God," he adds.

Tabish Khair, author of books like The Thing About Thugs and How to Fight Islamist Terror from the Missionary Position liked reading Brazilian novel Diary of the Fall by Michel Laub (translated by Margaret Jull Costa), Addy Pross' What is Life?: How Chemistry Becomes Biology and poetry collection Eating God: A Book of Bhakti Poetry, edited by Arundhathi Subramaniam.

"In Diary of the Fall, by focusing on an act of childhood brutality and its mundane consequences, Laub retrieves the tragedy of the holocaust from its scholarship, politics and deniers, cutting to the bone of human life. What is Life? is an excellent example of a scientist writing an accessible book about cutting edge science for the general public while 'Eating God: A Book of Bhakti Poetry' is excellently edited by Arundhathi with a choice of the best translations into English by major poets and translators," the Bihar-born writer, now a professor at Aarhus University in Denmark, says.

The top three picks of Delhi-based German author Roswitha Joshi were The Dalai Lama's Cat by David Michie; A God in Every Stone by Kamila Shamsi and half girlfriend by Chetan Bhagat. "They all convey powerful messages," she says.

Mumbai-based Jerry Pinto, whose "Helen: The Life and Times of an H Bomb" won the National Award for the Best Book on Cinema, lists Crowfall by Shanta Gokhale, When God is a Traveller by Arundhathi Subramaniam and Naseeruddin Shah's autobiography And Then One Day.

He says Crowfall is an "elegant novel about a city that is slowly eating its own heart out, told with care and love; the poems in When God is a Traveller are deep and wide and resonant with a quest for the depths of experience while And Then One Day "must be the best memoir of an Indian actor".

Samit Basu, who writes books, comics as well as films, enjoyed Ancillary Sword by Ann Leckie, Saga by Brian K Vaughan and M R Carey's The Girl with All The Gifts.

Thriller writer Ashwin Sanghi, who came out with his first non-fiction work 13 Steps to Bloody Good Luck this year besides co-authoring James Patterson in the racy Private India, named The Innovators: How a Group of Hackers, Geniuses, and Geeks Created the Digital Revolution by Walter Isaacson; Napoleon: A Life by Andrew Roberts; Gillian Flynn's Gone Girl; Being Mortal: Medicine and What Matters in the End by Atul Gawande and John Sandford's Field of Prey as his top picks.

"Isaacson's The Innovators... is an amazing and unputdownable story of the people who created the computer and the Internet. Napoleon: A Life is a wonderful biography that uses Napoleon's own letters to better understand the character of this incredible statesman and strategist.

While Gone Girl a thrill-a-minute story in which nothing is predictable... Compelling and taut, Being Mortal is incredibly moving. Field of Prey is a fantastic thriller in which the discovery of a pile of decomposing bodies leads to some disturbing revelations," Sanghi says.